Turn your foot out as you step, which will open up you hip and allow for greater rotation when you throw the knee making it more powerful.

While Eastern Asians were developing the strict patterns of the Martial Arts before Westerners even thought up the Sweet Science of boxing. The people of what is today called Thailand took a different approach entirely.

Adding to the traditional striking methods of punching and kicking. They discovered the raw power that could be unleashed with the elbows and knees.  So effective was this new style of fighting that when it first began to spread, outsiders seeing it for the first time thought the pre-fight ceremony, performed by all Muay Thai fighters to this day, was a form of black magic to curse the opponent and ensure victory.

Less to do with magic and more to do with powerful muscles of the hip while throwing the knee and the skin-splitting sharpness of the elbow. These strikes took the brutality of hand-to-hand combat to a new level.

The Knee vs. The Muay Thai Knee

The Thai’s have been using this style since at least the 16th century.  With 500 years experience, they have perfected the art of body bashing.  So while thrusting a knee into your opponent’s body is going to hurt. The Muay Thai Knee utilizes subtle nuisances, refined over centuries, to maximize damage.

Let’s take a look at how to throw the Muay Thai Knee.

What makes the Knee So Powerful?

The knee is powerful for two main reasons:

Working together, these muscles make the hip joint the strongest in the human body. Included in this pack of muscles are the glutes, which are the largest and most powerful muscles in the body.  Practically impossible to fatigue to exhaustion, the glutes will keep going when all the other muscles give out, giving them power and stamina.

The glutes come into play during the last stage of the knee to add the finishing power to the movement as the fighter pushes through the hips driving his knee into his opponent.

So not only do you have a bunch of muscles in your hips, including the strongest muscle, but the hips also include the strongest bone in your body – the femur. The bone of the upper leg, the femur can resist pressures of up to 2,500 pounds, so it terms of hand-to-combat it’s essentially indestructible.

Combining these two factors to deliver a blow straight up into someone’s liver and you basically have the human equivalent of a battering ram.

Most think of the knee as a close range attack, but over the centuries Muay Thai has developed 8 different styles of knee strikes to accommodate almost any position and situation.

The straight knee, often called the spear knee, is a long-range knee strike, especially useful for long-limbed fighters with a reach advantage, to knock their opponents back into a defensive position.  A well timed straight knee can stop any forward advancing opponent dead in his tracks.

Here’s how to throw a straight knee

Turn your foot out as you step, which will open up you hip and allow for greater rotation when you throw the knee making it more powerful.

(If throwing a knee with the lead leg then a switch step will be used.)

The power is generated through the lead leg, so when the knee lands that leg should be fully extended.  Not all fighters will come up onto their toes, but you should be driving through the ball of the foot to generate maximum power.  As a result of this drive, many fighters will naturally come up onto their toes.  This will also give extra height for shorter fighters.

Notice the front leg extension in the picture below. 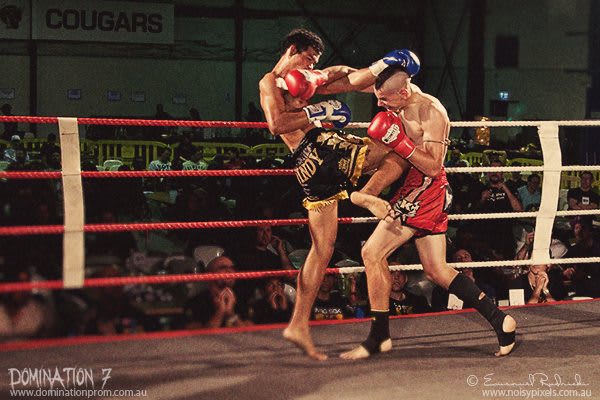 Once you bring the knee up you want to rotate the hips over and push them forward. This is where your powerful glute muscles come in to finish the job.  Be sure these muscles are fully contracted as you push both hips forward and then drive your knee into your opponent.

This forward drive into your opponent is what makes the straight knee a long range weapon and why the kick is aptly named the spear kick, as you want to think about stabbing your knee into your opponent’s body instead of hitting it.

If you’re really going for a home run and want maximum damage, lean your torso back to accentuate the hip drive even further.

Notice how far back this fighter leans as he slams his knee into his opponent’s ribcage. 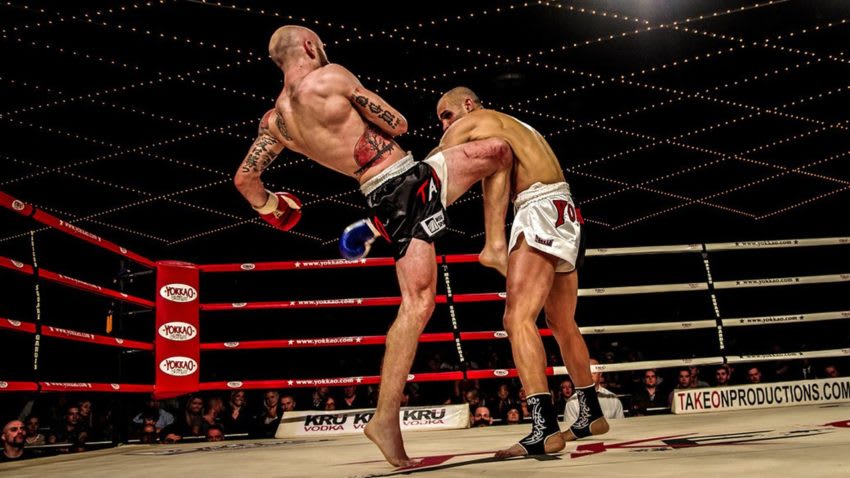 As also can be seen in the picture above, the fighter swings his arms to the same side as his knee strike.

So again, you’ll want to rotate your hips over to the side of your grounded leg while swinging your arms in the opposite direction towards the side you are kneeing from.

This counter-rotation helps to create a stronger rotational force through the body and adds more power to your knee.

The knee is a large joint and as such could produce a large point of contact when thrown. This large surface area distributes force over a wider area, weakening the total effects of the strike.

As you know the head of a spear comes to a sharp point which inflicts the damage.  Without this point, the spear becomes just another stick.

Visualize this as you throw your knee and try to mimic a spear by making your knee as sharp as possible.

To do this point the toes straight down, pull your heel to your butt, and aim to hit with the top corner of the knee in order to “spear” your opponent.  This will make your knees much sharper and more devastating.

This picture is about as textbook as it gets.

Just as you would use a spear to thrust into an opponent’s body, you want to do the same with your knee. Think of kneeing through your opponent instead of at your opponent to get the desired effect.

While throwing the knee you should have your hands up and long to help guard against any attacks. Also, make sure to bring your knee back and down so you end up in the same position as you started.  This will allow you to recover quicker and continue attacking.

Using Straight Knees in the Clinch

As mentioned earlier this style of Muay Thai knee is used as a long range weapon but can also be used very effectively in the clinch.

To do this the fighter should maintain control of the head as he pushes his opponent away to create the necessary space for the knee to come up.

Then as he begins the strike, he will pull the opponent closer, pulling his body directly into the driving knee.

This is an especially effective technique for fighters with a height advantage.  And here’s a prime example of that with long and lean fighter Dieselnoi.

It’s All About The Angles

Muay Thai style knees can range from the annoyance of a knee slap to the debilitating power of a knee bomb.  However, the delivery methods are all similar to the straight knee to varying degrees.

One of the biggest differences is the angle on which the knee is delivered.

For example, using the straight knee method but then internally rotating your femur and bringing your shin to a more horizontal angle is going to allow you to strike with the hardest part of the knee.  However, while coming in horizontal, most fighters may experience a reduction in power.  This is why, with some exceptions, you’ll see most fighters use a hybrid of the two and bring the knee up and forward on a diagonal plane to get the best of both worlds.

But as with any striking, it all depends on your opponent and the situation to choose which style is best

Master the basics of the straight knee first and the other knees will come much more naturally.

But no matter how you do it, there’s no debate that Muay Thai style knees are a devastating weapon that any serious fighter should have in their attack arsenal.

How to do a triangle set up from mount

How to deal and counter a pressure fighter

Once suspended, baueroller will not be able to comment or publish posts until their suspension is removed.

Once unsuspended, baueroller will be able to comment and publish posts again.

Once unpublished, all posts by baueroller will become hidden and only accessible to themselves.

If baueroller is not suspended, they can still re-publish their posts from their dashboard.

Once unpublished, this post will become invisible to the public and only accessible to Baue Roller.

Thanks for keeping This MMA Life safe. Here is what you can do to flag baueroller:

Unflagging baueroller will restore default visibility to their posts.