I didn’t find Muay Thai, Muay Thai found me. I was looking at getting active again at the age of 52 after not going to a gym for over 1 and a 1/2 years. I had no intentions of walking into the gym at that time because boot camps were for GIRLS (man was I wrong). So with the urging of Marlene, I tried it, and then tried it again. Then I wanted a bigger push so I started with Muay Thai beginners class; loved it.

Over a short period of time I still wanted to be more active and really didn’t know what to do. I thought of going back to a traditional gym to supplement what I was doing at the Muay Thai gym and also thought of joining the local track team. Through all these thoughts, I had been noticing the fight team train. It looked like fun and perhaps a push I was needing? But how would a 52 year old be able to join this team of 14-35 year old fighters?

As with most things in life, I overthought it (really overthought) then I made the call to Sandra Bastian, the coach of the team. I explained what I wanted and was told I was able to come try, but it would make anything I had done before look like child’s play.

So I tried, and OMFG did I get my ass handed to me. I still remember the first class like it was yesterday. It was long, it was hard, and the coach was upset with the fighters so it was, as the team would later tell me, one of the hardest practices they had ever had to that point. I think the grueling nature of the first class is what hooked me because I do not fail!

Fast forward to today, and what keeps me going is the sport, the team, the mental push and the fact that it has become a couples activity for Marlene and myself. Also, the fact that the coach has now become my Kru ❤️👍🙏🏻.

I have found my place in this family. I will never fight, not because of not wanting to but, because of age. However, I go to every class to try to out train the fighters.....and that is the mental push that I need. I will never be good, but I will die trying to be better, and that it what it’s all about for me. 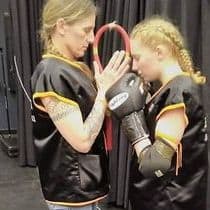 Two Loses, My First KO and a Change of Perspective

A Scot, an Italian and a nervous nellie walk into a sports hall..

How to become an MMA journalist