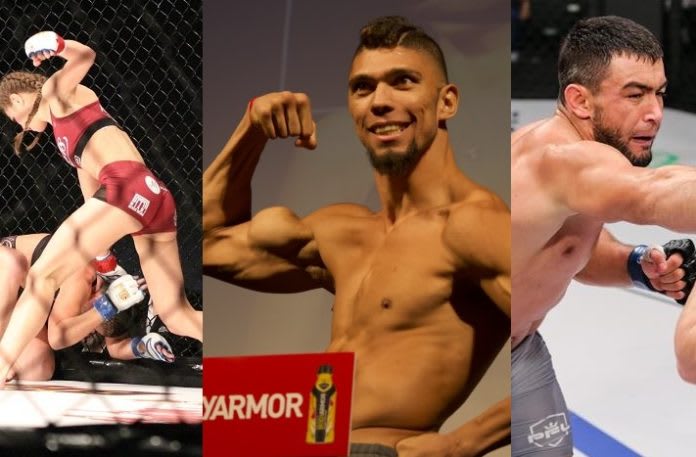 Originally Published at Cage Side Press

Mixed martial arts has grown to become a sport followed by fans across the globe, and as the sport has grown, so too has the business side. Fighter pay, and other benefits, have become more important than ever before. And with that, the importance of managers has grown in step. Cageside Press had the pleasure to speak with some of the top MMA managers in the sport recently. In doing so, we had the opportunity to learn about their journey into the business, their future, and get their thoughts on the industry.

Next, we spoke to Sayat Abdrakhmanov, a manager for Ruby Sports & Entertainment. Ruby Sports deals with many top fighters from around the world. Some of those include Petr Yan, Raphael Assuncao, Michael Chiesa, Mackenzie Dern, Alexey Kunchenko, and much more.

Adrian Bakos, the founder of the GAMMAF (the German Amateur MMA Federation), is a manager for First MMA Management out of Berlin, Germany. He manages the likes of Bruno Silva, Klidson Farias, and many more international talents.

We also spoke to the CEO of Aspera FC, Marcelo Brigadeiro II. Marcelo is a Head of International Business Development for MTK MMA Global. They manage the likes of Darren Till, Alex Silva, Glaico Franca, Mike Grundy, and much more.

Matt Dodge is the CEO of Dodge Sports. Matt has clients including UFC fighter Andre Ewell, and other top prospects as well like Aaron Jeffery, Cole Ferrell, Anthony Romero, and Jared Vanderra.

Matt Weibel is yet another high-level manager we got to speak too. Weibel as a part of the well-know First Round Management group. Just some of their clients include Jorge Masvidal, Anthony Pettis, Tyron Woodley, and Yoel Romero.

Finally, we had the pleasure of speaking to Brazil’s Tiago Okamura. Okamura works with On The Road Management and manages the likes of Jessica Andrade, Elizeu Capoeira, Marina Rodriguez, Virna Jandiroba, Ion Cutelaba, and more.

On the following pages is our Q&A with each manager, in an effort to give you a different perspective on the sport, and the place of managers within it.

First up, Richard Guerrero, from Mata Leon Sports Management. In terms of his success, look no further than Curtis Blaydes, a Meta Leon heavyweight who has achieved contender status atop arguably the most popular division of the sport. Blaydes is back in action later this month, as he headlined UFC Raleigh opposite ex-champ Junior dos Santos.

How did you get into MMA?

Richard Guerrero- “In 2007 in Chicago I started training Muay Thai at MTC and then BJJ under Comprido at Flo.”

What got you into wanting to be a manager and how did it happen?

RG- “In 2009 I was training one day and an 18-year-old kid from the gym, who had not had a fight yet, asked me to manage him. He knew I was a marketing/sales professional, and believed that I could help direct his career. I agreed, and the rest was history. I quickly learned the management side of MMA, built relationships with promotions, matchmakers, coaches, attracted sponsors. It honestly took me 4-5 years to have a good stable of promoters and gym relationships. The word spread in Chicago and I slowly built up a stable of young prospects, eventually looking nationally and internationally for athletes.”

How do you go about finding new fighters to sign? Are you actively watching the regional scene, maybe even watching ammy fights?

RG- “I focus on amateurs and low record pro prospects and bringing them up. I have a scout as well who has databases of fighters and we together go thru who we like, we only find a fighter every four months or so.”

What are some mistakes made by other managers you notice?

RG- “I don’t exactly know what the rest do but I focus on quality over quantity, as finding the path can be difficult to find, and with too many fighters each individual athlete won’t get the attention they deserve. Also, it’s very important for your strongest management area to reflect on what the fighter’s greatest goal is, to be a champion. I myself train,

talk with coaches on game plans, pick opponents, help decide what weight class my guys should be at, finding gyms and supplemental training, etc..”

What are some ups and downs of being a manager?

RG- “With my style of long term management there is a great deal invested over the course of a fighter’s career, so both often revolve around the wins and losses. I get as nervous as some of my guys’ parents. Additionally, I get to mold and help young men become men. It’s rewarding to see them grow and know that I’ve been a part of that.”

Let’s say you have a young fighter get an offer against an experienced fighter in a “dangerous fight?” Are you more of a slow build like Michael Page or a fast push like Aaron Pico?

RG- “We only work with guys who we truly believe have the opportunity to win a belt, so we often very quickly get to the point where they would fight mostly everyone on the regional scene, e.g. after 5 fights. That being said we typically want to build up to that point.”

What is your opinion on fighters managing themselves? How important do you think it is for a fighter to have a manager?

RG- “As someone sells their house with a realtor, they need a manager to handle their fight career. Agents/managers in all kinds of businesses are necessary as they view the end goal and path without emotion, and therefore can see it more clearly, not acting on impulse but with the long term goal in mind.”

What is some advice you have for someone looking to get into the industry as a manager or someone just now starting?

RG- “Be patient and gain experience with a small number of fighters. Hit the phone for promoter/matchmaker relationships as well as for sponsors. Most importantly don’t rush your fighter to try and hit a home run, this can be a marathon.”

What is the toughest challenge as a manager?

RG- “Finding fights on the regional scene. I often have to cover travel and hotel which can cost an excess of $1500 for a fighter and one corner. Fights have been pulled and I’ve had to eat those costs. I had one athlete this year that had three fights pulled and it cost me a near $6,000.

*Who is a client/prospect you have on the team that is for the most part, unknown but you thing has a high ceiling?

RG- “Edwin Cooper Junior is 26yo and 2-0 at 145 out of JacksonWink; he has the potential to be a champion. He has some of the highest level wrestling in MMA at FW: 3x IL HS state champ, NJCAA National Champ, D2 Finalist, and he was a national qualifier at the University of Iowa. He’s worked a lot on his striking and at only 2-0 he is already a very well-rounded fighter. He will be fighting for LFA on 1/17.”

What is a goal you still haven’t reached but still something you want?

MMA math & why it doesn't always add up

Latest Newsletter is out 🚨

hannahwoking
I work as a personal fitness training. I am also into yoga, judo, general mixed martials.
MMA Basics. How to defend against the calf kick.
#beginners #calfkicks #tutorials
How to become an MMA fighter
#beginners #business #tutorials #opinion
How hard is it to be an MMA fighter? - Heartbreaking interview with Jimmy Flick
#mystory #mmanews #opinion #interviews