Since I began my journey as a professional mixed martial artist, I’ve been asked the same questions over and over again: Why do you fight? What is it about fighting that attracted you to the sport? How did you get into fighting?

I also get asked questions about fight camp, but since I haven’t really been ‘in camp’ for a number of years I’ve been feeling a bit of a fraud answering that one. However, after a two and a half year lay-off, I got back in the cage and it was mental.

I’d been wanting to get back in the cage for a long time, but for various reasons, it hadn’t happened. Then the opportunity came up to fight a Brazilian girl on a promotion called ‘Brave’ in Bahrain. OBVIOUSLY I jumped at the chance because I wouldn’t really be me if I hadn’t. The fight was at strawweight which is 52.2-52.6kgs (115-116lbs). I accepted the fight on 4 week’s notice when I was 61kgs. My first obstacle was my weight.

Speaking of which, the biggest fight I have is my weight. Without going into too much detail at this stage, weight is the one thing I’ve always struggled with. At 21, I binged my way up to 85kg (I’m 5’1”/155cm) and ever since I got myself down to 57kg I struggled to maintain it. After a bad concussion in a fight (2016) the depression set in and took hold, which brought me right back up to 68kg.

I expected this camp to be a struggle, especially with my weight, simply because I haven’t done it for so long. Somehow, after the first few kilograms came off it seemed to fall off me, almost as though it had been waiting for that moment. I hit a plateau at 56kg and struggled to break past it for almost a week. Once I broke 56kg, the rest simply fell off me. In fact, in the final week of camp, in Bahrain, I didn’t visit the sauna once!

Weight management is clearly a huge part of any fighter’s camp. The training sessions become harder and harder as the calorie deficit kicks in. Some fighters have tricks on how to deal with it, but mostly it’s a mindset, ‘how bad do you want it?’.

When I’m at the end of the week sparring, and I’ve just been taken down. I lie on my back trying to muster up the energy to escape. At the same time, I wonder why I do what I do. I want to know what is really and truly driving me. Because it’s absolutely nuts. The sport we love so much is completely crazy. Two people essentially trying to kill each other until either the referee stops it or someone taps out.

Some days I can bring about a very convincing argument as to why I love MMA so much. Sometimes, however, I struggle to put just once sentence together as to why I compete in such a ridiculous sport.

Fight camp doesn’t necessarily mean more training sessions, but it definitely means the intensity level increases. I like to train a lot anyway, so for me, it’s just a case of adding in a little more strength and conditioning as well as working harder all round. Day depending, I get 1-3 training sessions per day – Wednesday contains the most sessions, but Friday is sparring day so it’s definitely the most intense. 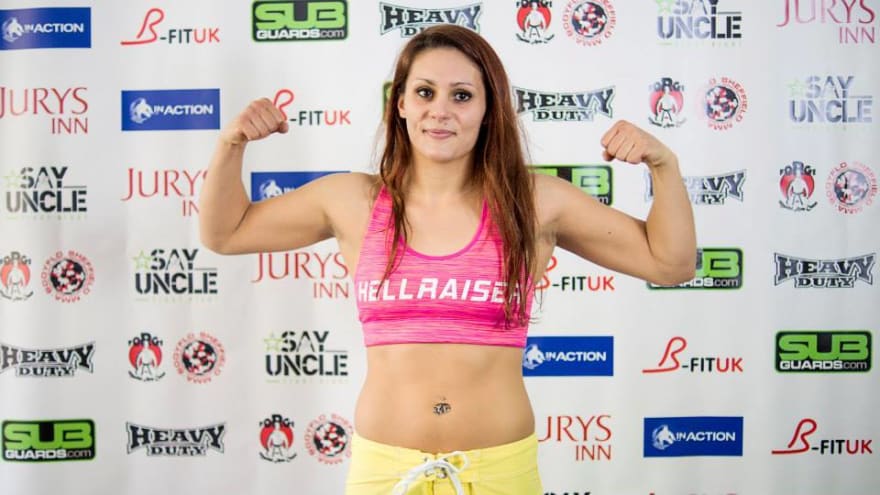 Every week I set myself a goal, so as to focus myself during each session. For example, this camp, I knew I was preparing for an opponent with fantastic judo and wrestling. Although I wanted the fight to go to the floor, I wanted it to be on my terms. Every session, I counted the number of times I got taken down and tried to lessen it. I also counted how many times I got the takedown, and tried to increase it. After a week of this, I added in how many times I reversed a takedown, and managed to regain control of my training partner. Doing this helped me focus on the individual parts of my technique, and stopped panicking so much when I did get taken down.

I’m pretty sure fight camp is meant to break you, and rebuild you like a stronger version of yourself. The next level up if you like. The more fight camps you undertake, the more resilient a fighter you become. I am proud of what I achieved this fight camp, but it pains me to say that I worked so hard to have lost the fight. What I do know, is the lessons I learnt through this fight camp will stick with me for the rest of my fight career, however long it may be.

Helen Harper is the owner of HHH Selfdefence.

Helen teaches beginners martial arts online so that you can gain confidence and feel empowered. By following my daily habits methodology, you will start to feel incredible in every aspect of your life.

HHH Self Defence
Hellraiser. Personal Trainer.
How to take someone down who’s way bigger than you 🤼‍♀️
#howto #wmma #tutorials #selfdefenseforwomen
Depression is like walking through treacle.
#inspiring #wmma #mystory
How as an MMA trainer, I took a leap of faith
#business #wmma #mentoring #inspiring

Once suspended, hhselfdefence will not be able to comment or publish posts until their suspension is removed.

Once unsuspended, hhselfdefence will be able to comment and publish posts again.

Once unpublished, all posts by hhselfdefence will become hidden and only accessible to themselves.

If hhselfdefence is not suspended, they can still re-publish their posts from their dashboard.

Once unpublished, this post will become invisible to the public and only accessible to Helen Harper.

Thanks for keeping This MMA Life safe. Here is what you can do to flag hhselfdefence:

Unflagging hhselfdefence will restore default visibility to their posts.