Your Guide to the Professional Fighters League

If you’re a fan of mixed martial arts, then chances are you’ve heard—or more likely, have seen—that the Ultimate Fighting Championship (UFC) is now on ESPN, with fights and pay-per-views available on ESPN2 and ESPN+ (ESPN’s streaming service). What you may have missed, though, is that ESPN picked up another MMA federation in 2019—the lesser-known Professional Fighters League.

Formerly known as the World Series of Fighting, the PFL premiered its rebranded image to the world last year at the Hulu Theater at Madison Square Garden. Compared to the typical PPV model, the PFL is changing the way athletes compete and fans watch.

The PFL season premiered on ESPN on May 9 and is airing its second event this Thursday, May 23, so we’ve put together this guide on everything you need to know about the UFC’s newest competition.

How The PFL Works

You’ll notice that we wrote “season” above. That wasn’t a mistake. Unlike other MMA leagues, which air events on PPV and streaming services year-round, the PFL adheres to a structured season, which is meant to give fans a similar feel to more mainstream sports.

The PFL’s regular season runs from May to August and is comprised of six events, where each fighter on the roster fights twice to accumulate points. The eight point leaders in each of the six weight classes—men’s featherweight, lightweight, welterweight, light heavyweight, heavyweight, and women’s lightweight—are seeded to compete in the PFL’s three playoff events in October. These three fights all lead up to the championship finale in New York, where the winner of each weight class takes home a million dollars. 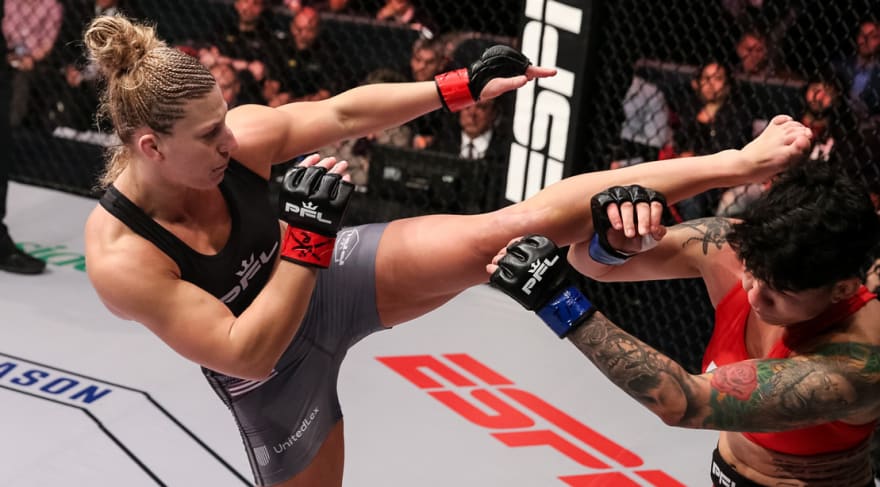 How Points Are Awarded

In the UFC, athletes are awarded performance bonuses of $50,000 for putting on exciting fights. Along the same lines, the PFL believes that their point structure makes for more entertaining performances throughout the entire season. Even if you win but aren’t knocking opponents out, you could lose your shot at that cool million.

“With this format, fighters control their own destiny. Every round counts and every fight matters,” Peter Murray, CEO of the Professional Fighters League, says. “Sixty-five percent of PFL fights in our first year ended in a knockout or submission…the format ignites fighters.” Need proof? Check out the video below.

The insurmountable star power of athletes like Conor McGregor and Jon Jones is a big part of what makes the UFC such a force in the world of MMA. As a nascent organization, the PFL can’t match the MMA juggernaut—yet—but still managed to cull notable talent from 15 countries and added a women’s lightweight division in 2019.

“This season we have added the first-ever Women’s Lightweight Division, anchored by two-time Olympic Judo Gold Medalist Kayla Harrison,” Murray says. “And Ray Cooper III is a star. In 2018 he won his first four fights by knockout before losing in the championship to Magomed Magomedkerimov, one of three fighters who went undefeated last season. Also, Lance Palmer, a four-time All-American wrestler at Ohio State and PFL Featherweight champion returns looking to repeat.” As far as new talent goes, Jordan Johnson joins the light heavyweight ranks from the UFC with a perfect 10-0 record. 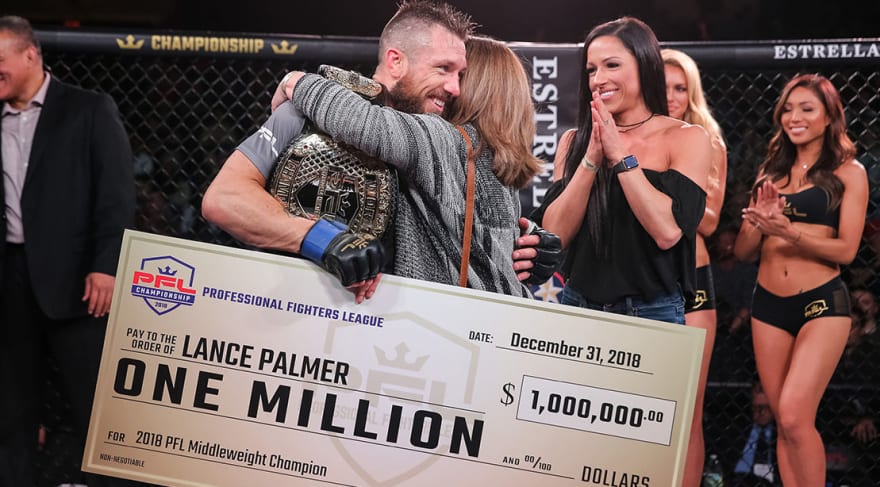 After the regular season, the point leaders are seeded, with No.1 fighting No. 8, No. 2 fighting No. 7, No. 3 facing No. 6, and No. 5 fighting No. 4. Playoff fights are single elimination, following the PFL’s unique fight-twice, win-twice format. In other words: a fighter who wins the quarterfinals fight goes on to fight in the semis that very same night. It’s an interesting structure, especially when you consider that one athlete may endure a 25-minute war while his opponent could have had a blink-and-you’ll-miss knockout within 30 seconds.

The winners of those fights will face off in the Hulu Theater at Madison Square Garden for the million-dollar prize. Everyone else gets a little something, too—quarterfinal losers take home $25,000, semifinal losers get $75,000, and fighters who lose in the finals earn $150,000.

Once suspended, jaynie_ramirez_fb will not be able to comment or publish posts until their suspension is removed.

Once unsuspended, jaynie_ramirez_fb will be able to comment and publish posts again.

Once unpublished, all posts by jaynie_ramirez_fb will become hidden and only accessible to themselves.

If jaynie_ramirez_fb is not suspended, they can still re-publish their posts from their dashboard.

Once unpublished, this post will become invisible to the public and only accessible to Jaynie Ramirez.

Thanks for keeping This MMA Life safe. Here is what you can do to flag jaynie_ramirez_fb:

Unflagging jaynie_ramirez_fb will restore default visibility to their posts.