What It Was Like at a UFC Fight Night

If you know me, you know I love watching mixed martial arts fights. My dream is to see Invicta FC in person, but when I saw the lineup for… 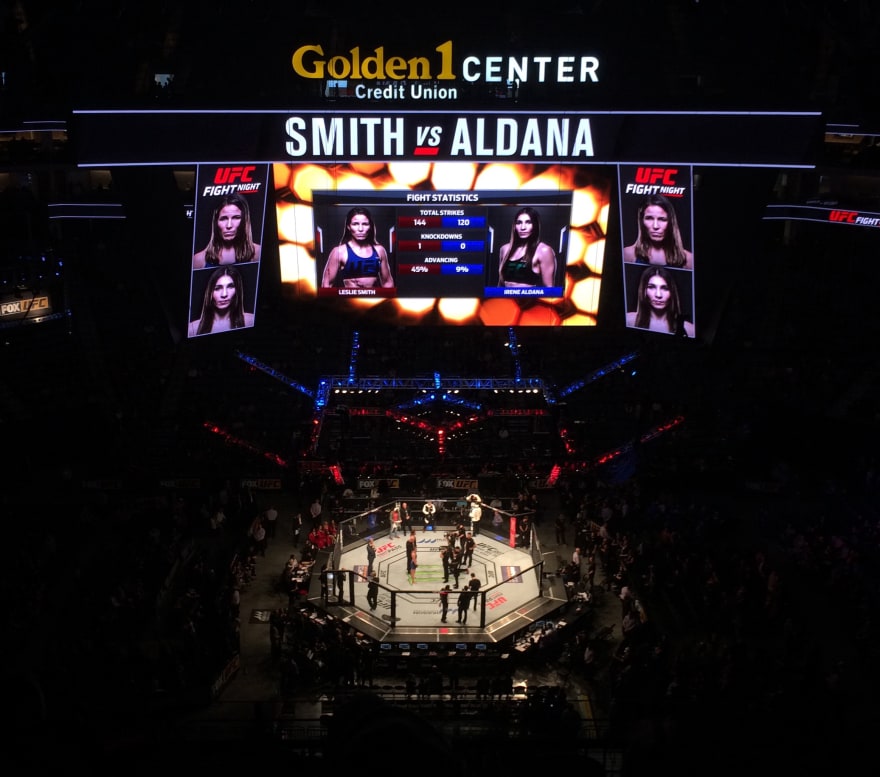 My favorite fighter about to get her hand raised after a brilliant fight at UFC Sacramento.

If you know me, you know I love watching mixed martial arts fights. My dream is to see Invicta FC in person, but when I saw the lineup for the UFC Fight Night in Sacramento, I concluded that I had to go.

My favorite MMA fighter, Leslie Smith, was fighting, and the night was headlined by a fight between Michelle Waterson, a former atomweight Invicta champ and Paige VanZant, who has a fun fighting style. I also love watching the mens’ fights, and the night had some good matchups there.

At the same time, I didn’t really know what to expect attending one of these events. Fights viewed in your living room take on the atmosphere you make. In person, I’d been to a couple of local MMA and Muay Thai kickboxing fights before, but they were small events with mainly family and teammates in the audience.

There was also the question of getting friends to go see UFC with me. You could say that I run in some intellectual circles. Overall, I’ve been surprised with how many of my friends are open to MMA, but there’s a whole nother layer of judgement for the UFC I feel. See also: Meryl Streep.

In the end, I found some people that wanted to go: 1) My friend who practices Jiu-Jitsu. He’s my main MMA friend and he knows the fighters and technicalities. 2) My roommate. She has a lot of muscles so I had a feeling I could get her into MMA, and luckily I was right — she’s super into it now. 3) My other friend who is more conservative and squeamish than the others, but is still down to watch fights.

I got the tickets just a week before the fights. Most seats were gone, but there were a few left in the upper sections. The days leading up to it, I got more and more excited. There’s something special about seeing fights in person. I couldn’t wait.

The morning of the Fight “Night” (full day), we did the 2 hour drive to Sacramento and got there right as the first fight (of 13) was starting.

The arena was only a quarter full at the start, and we had the section practically to ourselves. We draped our legs over the seats below us and got ready to watch the preliminary fights. Our upper level seats actually had a pretty decent view of the octagon, but there was an enormous screen at eye level where you could see the close-up angles that were also being televised live.

Each fighter’s walk-out music filled the arena and actually changed how I perceived them and what their attitude was to the fight. That’s something different than watching on TV, where the music is hard to hear.

I’m not going to lie, I don’t remember a lot about the early preliminary fights, and the crowd was pretty small at the time too. But it was an opportunity to see the whole machine working. Lining the octagon/cage were rows of screens where we think they were picking out the best camera angle to broadcast.

The ring card girls huddled together in robes on their cell phones. All-female models at professional events make me uncomfortable, especially when they’re actually the most prominent women at the whole thing. So, I will say that it’s less of a bad feeling when women are also headlining the same event — like they’re being seen for the main profession. Most of the fans get completely behind the women’s fights and fighters too.

We got to observe the booming announcer person in his downtime, and see a few well-known fighters in the cageside seats. I spotted Holly Holm a bit later on.

After the early preliminary fights came the preliminary card and the start of the cable-televised section. This was started off by the main fight that I came to see — Leslie Smith vs Irene Aldana.

Leslie Smith is my favorite fighter for a few very different reasons. For one, she speaks out about issues she cares about. She’s trying to get better pay for fighters by promoting unions, which MMA currently doesn’t have. She’s not even in the safest position in terms of her win record, so this is very brave. She also talks openly about the Dakota pipeline, bad stoppages in fights, and sexist comments others make about the women fighters.

She also just puts on the best fights. She’s aggressive, which might sound obvious, but honestly that’s not a word I’d use to describe the way many people fight. Her style is to be the one advancing and forcing her opponent backwards, while overwhelming with a mix of body shots (kicks and punches to the torso) and head shots. It’s quite a sight to see.

Promoters will advertise MMA fights like they’re non-stop raging slugfests. The reality is that fighters are in a high-pressure sports performance situation, taking pain and also trying to avoid getting caught, so it’s no surprise that many fights end up being on the cautious side. The way Leslie Smith pulls out relentless aggression during fights is nothing short of very impressive.

Leslie did just that in this fight, and it was spectacular. It was the first fight where the crowd really went crazy. The place was still less than half full, but there was a roar when Leslie “dropped” Irene in the first round (aka stunned Irene with a punch enough for her to fall, but not go unconscious). Luckily, Irene got up and held her own.

The fight lasted all three rounds with constant combinations and attacks from both sides, and Leslie often in control of the center and the one advancing. It went to decision (aka the fight was decided on points, rather than being stopped early), and as expected the judges gave it to Leslie. It was so awesome to see my favorite fighter win in-person, and even more to be around a lot of people who were excited too. It made my night.

Then some more fights happened. People also went crazy for Josh Emmett vs. Scott Holtzmann, as Josh lives in Sacramento and it was a good fight. I missed most of a couple fights waiting for food and walking around. 4 hours of fights is too much, even for me. I was sad to learn that I missed a great armbar submission from Paul Craig, and his apparently incomprehensible (to Americans) Scottish interview afterwards.

A bit later, it was Urijah Faber’s last fight ever. I haven’t been following the sport for long, but from what I gather he’s quite a veteran. He’s a Sacramento local and he got the biggest crowd response of anyone. It was a fight that always seemed like it was about to be ended by Faber, but somehow Pickett would get out of it and survive. A lot of blood. It went to decision, but it was an obvious one for Faber. People stood up to give him an ovation as he walked out.

There’s no doubt of the effect local fighters have on the atmosphere. I wonder if the bigger fight nights in Las Vegas have a very different feel.

During these last fights, the place filled in. I obviously don’t know anything about all the people that were there. Our neighbors on our left were a family that didn’t react much. On our right were two women on a date night, that we chatted with a tiny bit. To the front were a group of teenagers playing it cool, and behind us were some louder jokesters.

We had a good time ourselves, making lots jokes during and between fights. One of my friends is still not used to watching fights, and would exclaim funny things like “she’s choking her! that’s not cool!” and “that looks so uncomfortable!”. I screamed a lot during Smith vs Aldana. At one point I shouted during a quieter moment, and I got the intonation wrong, so it came out less like “let’s go Leslie!” and more like “Leslie?”. So I was pretty worried at the time that it could have messed up her game.

There were boos for a couple of the fights that didn’t see a lot of action. Either the fighters were being cautious and tactical, or they were just too tired to bring more. This demand of entertainment is something I don’t think I’ve seen in many other sports. I personally thought the booing just made things worse.

There was a lot of build-up to the main event. Even the walk-out show for Paige and Michelle was bigger than the rest. I liked Michelle’s music. It was very calm, in this disarming way that would scare me if I were her opponent.

I remember my friend asking if she should use the restroom before the fight, and I said definitely, because the fight was five rounds. Well, it did not last five. Within a few minutes, Michelle had taken Paige’s back and got a rear naked choke. Despite the solid choke and her rapidly purple-ing face, Paige never tapped, and the referee stepped in after it had been held for awhile.

It all started with this throw:

Seeing my favorite fighter win an amazing fight made it all worth it. I was really pleased to see the UFC support it by giving it Fight of the Night honors. There’s a lot of focus on belts and championships, but a great fight is gold.

A big theme of the night for me was the line that fighters have to walk between being cautious and entertaining. Leslie talked about this in her great post-fight interview as well:

Video Interview. Learn from the former UFC Director of Social Media on the importance of your MMA social media game.

So you wanna be an MMA fighter?

Where does Muay Thai originate from? A very brief history..

UFC 249: Ferguson vs. Gaethje - A quick recap on my favorite event.

Once suspended, jaynie_ramirez_fb will not be able to comment or publish posts until their suspension is removed.

Once unsuspended, jaynie_ramirez_fb will be able to comment and publish posts again.

Once unpublished, all posts by jaynie_ramirez_fb will become hidden and only accessible to themselves.

If jaynie_ramirez_fb is not suspended, they can still re-publish their posts from their dashboard.

Once unpublished, this post will become invisible to the public and only accessible to Jaynie Ramirez.

Thanks for keeping This MMA Life safe. Here is what you can do to flag jaynie_ramirez_fb:

Unflagging jaynie_ramirez_fb will restore default visibility to their posts.