UFC 278, August 20th in Salt lake city, the well deserved rematch between the current pound for pound number 1 fighter on the roster, the welterweight champion Kamaru "The Nigerian Nightmare" Usman, against the slick all rounder Leon "Rocky" Edwards, for the second time.

19th December 2015 was the first time we saw these two elite fighters encounter one another, it may have been a whole nearly 7 years, but even watching their first fight back then, you just knew these two would throw down once again later down the line, both of them have unreal talent and on any given night I believe either man can win, but on that night back in late 2015 it was Usman who won the fight via unanimous Decision, since then Usman has defeated all 13 opponents that have stood in his way, now he is on his way chasing down that claim, that he is the greatest UFC welterweight fighter that there has ever been.

After that night Leon Edwards learned a lot about himself, he seemed to have brought into the idea/hype (pre fight) that after you hit a certain level in this sport, you have to go train in the best well known gyms (mainly) in America to evolve and become a better fighter, so that's exactly what he did, he traded home life in UK, in exchange to America for his training camp to take place at the well known, "AKA (American kickboxing academy) gym" for the first fight against Usman, Leon would later on describe how this move arguably cost him the fight, "When I fought Kamaru, at the time I didn't have a clue how to wrestle. Back in the day, it was a thing where you had to go to America to improve yourself and get better. The camper and the best, the coaches are like, 'Not your gym. You're like second to their fighters.' I didn't feel like I was learning much. That led me to go back home".

Since that fight Leon ignored what everyone advised him to do and since then he has stuck with the team/gym that got him to the dance via "Team Renegade BJJ & MMA", which turned out to be the right call as he is currently unbeaten in 10 fights (1 no contest). Now in conclusion both fighters have improved drastically since 2015 so this is one of those rare rematches that happen, where you cant really take footage from the first fight as signs on who will for sure win this second encounter, there are things both fighters did in that first fight which I believe they will or should carry into this fight, I'll explain...

For Leon in terms of striking, I think he got it pretty right last time out against Usman, as we know Usman has one of the best skills in wrestling in the fight game, his sheer strength helps with this, so with Usman there is always going to be level changing faints, to counter this Leon has very fast accurate kicks, so although he did this in their first fight, I'd like to see the kicks and knee's down the middle more often. 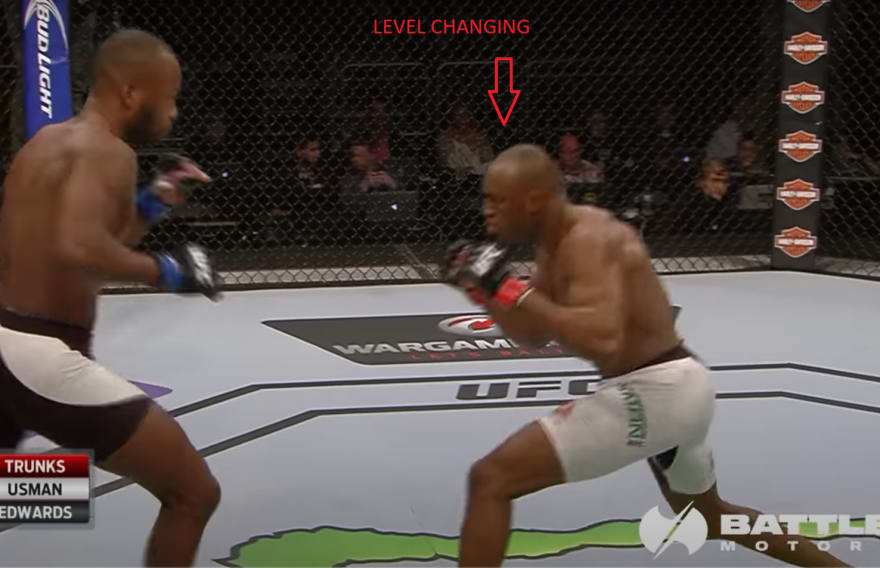 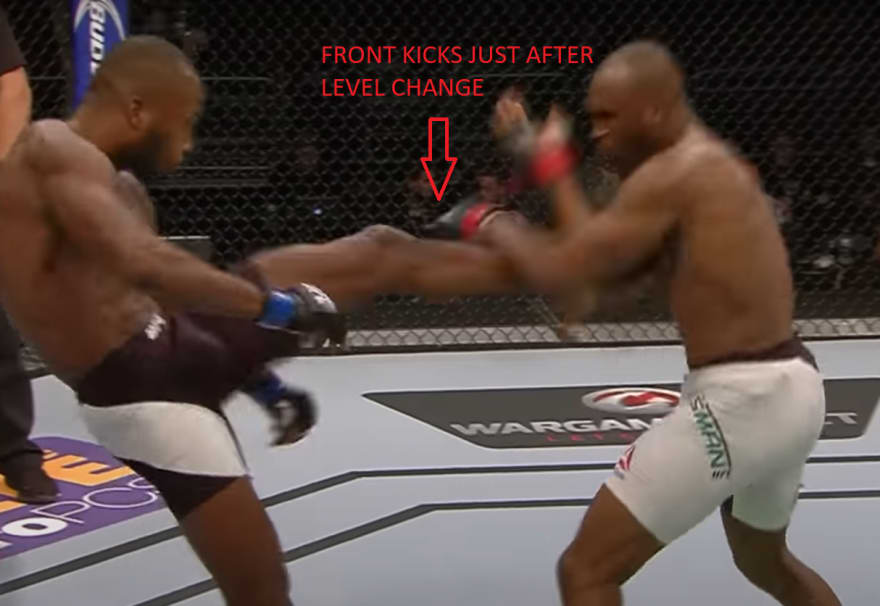 I fully expect this fight to remain in the clinch just like the first fight, if this happens again Leon has to throw strikes down the pipe not looping wide, in the images below Leon had a lovely knee then elbow combination that did hurt Usman, unfortunately for Leon the knee was a low blow, but these are the quick dangerous strikes Leon needs to use to keep Usman out of that clinch. 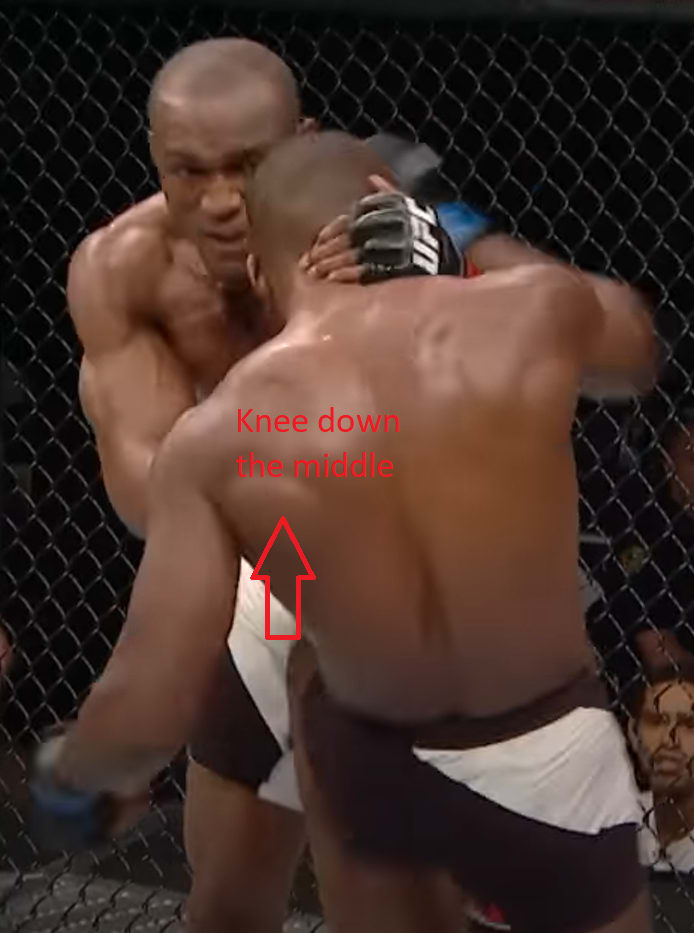 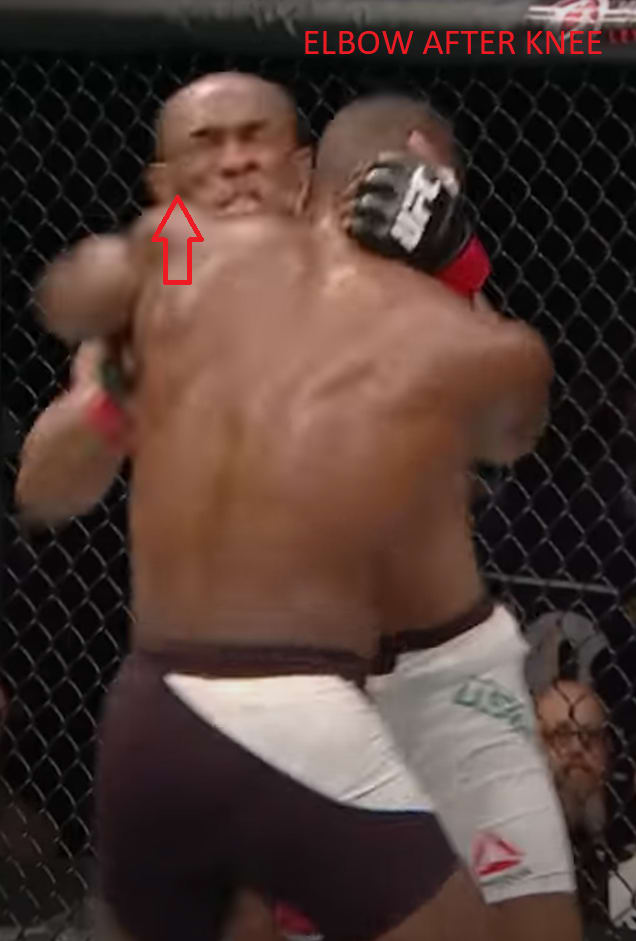 Lastly the potential fight finisher Leon could have is his submission skills, he's a very slick customer on the feet and on the floor, one can agree as a fighter he has completely evolved, so I'm sure his submission game is stronger also, when Usman eventually gets the takedown, Leon will be comfortable enough on his back to look for submissions, take last fight for example, in the first round he almost got a triangle choke on Kamaru, this could also be a big factor in Leon getting the win. 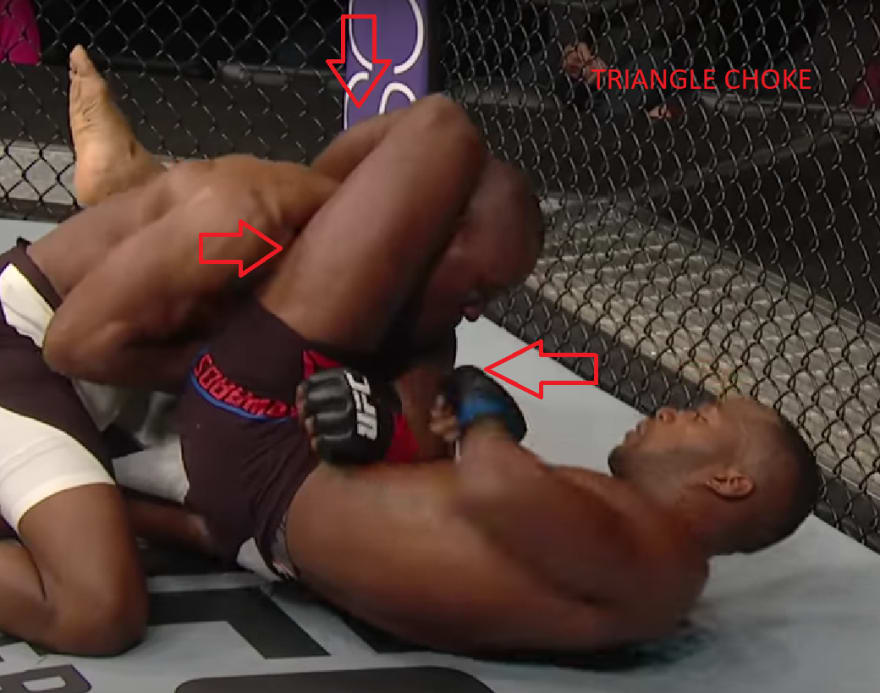 Now for Usman he did everything right against Leon, its easy to say he won because he out wrestled Leon, but it's getting into those positions which is the thing of beauty, Kamaru's cage control, forward relentless pressure, wrestling feints and his cardio is what makes him so far impossible to beat, I do feel Leon is a different beast this time around, but so is Usman. I still feel strongly that all Usman has to do to win this fight, is do what he did last time, but better.

I'm going to start with the single leg takedowns, Usman is a master of this, in the first fight with Leon he used this wrestling technique so well that it worked most of the time, he doesn't use it to take you down, he use's this to drive you into the cage where his sheer power just dominates and drains the energy out of your body, minute by minute as he clinches you against the cage. 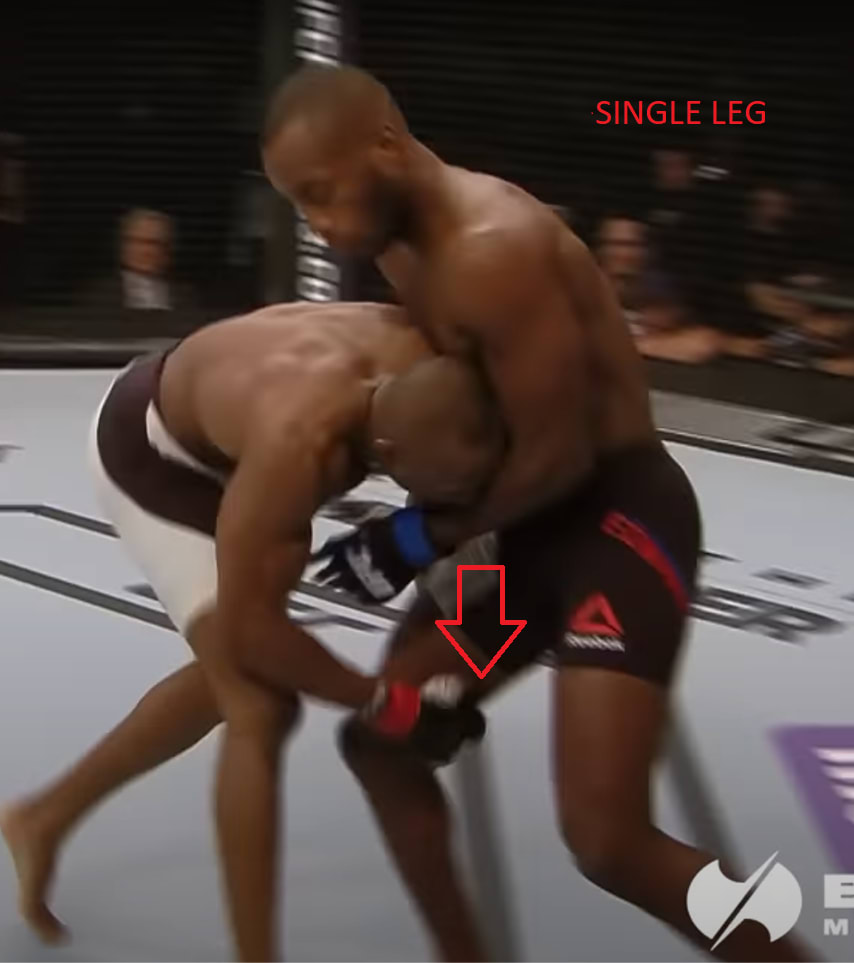 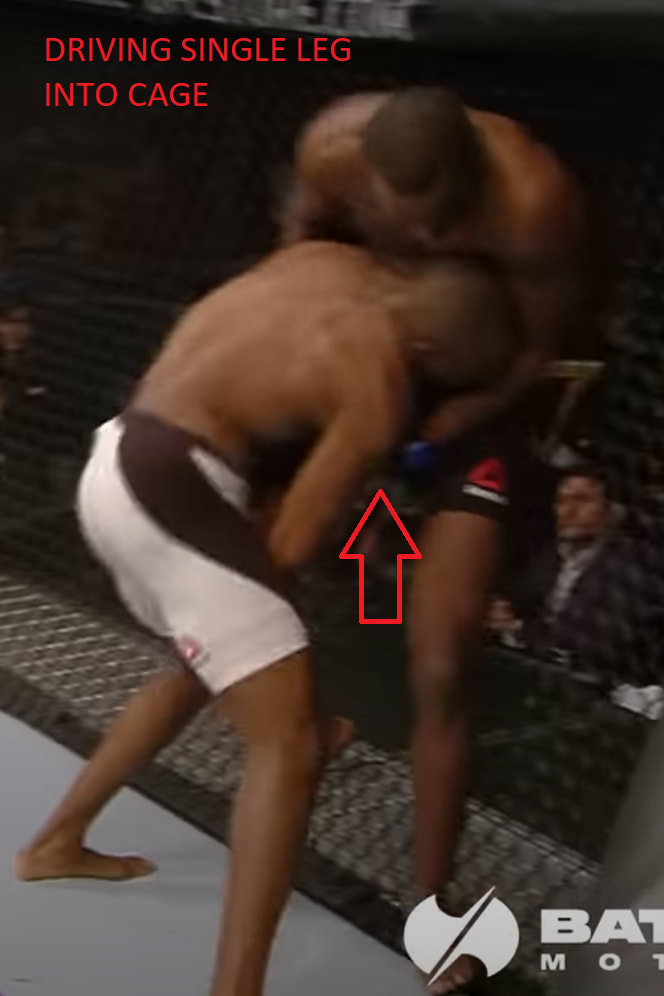 As I mentioned above Usman's keys to victory is just being himself, relying on that heavy wrestling, the single leg drives into the cage, clinch controls against the cage, controlling the octagon, having one of the best cardio's in the game to keep that forward pressure, a kickboxers worst nightmare is a forward pressuring wrestler as this takes kicks out of the equation, but most importantly keeping Leon outside of the cage, that to me is where he wins this fight or loses this fight, in the picture you'll see there's a inner octagon black outline, Usman needs to get Leon there and beyond for the easier access for takedowns and clinch controls into the fence, again as the pictures show once Usman has his hands on Leon (all against the cage) the round is pretty much over, he's far too strong in all aspects of the clinch and ground game, that much we saw last time. 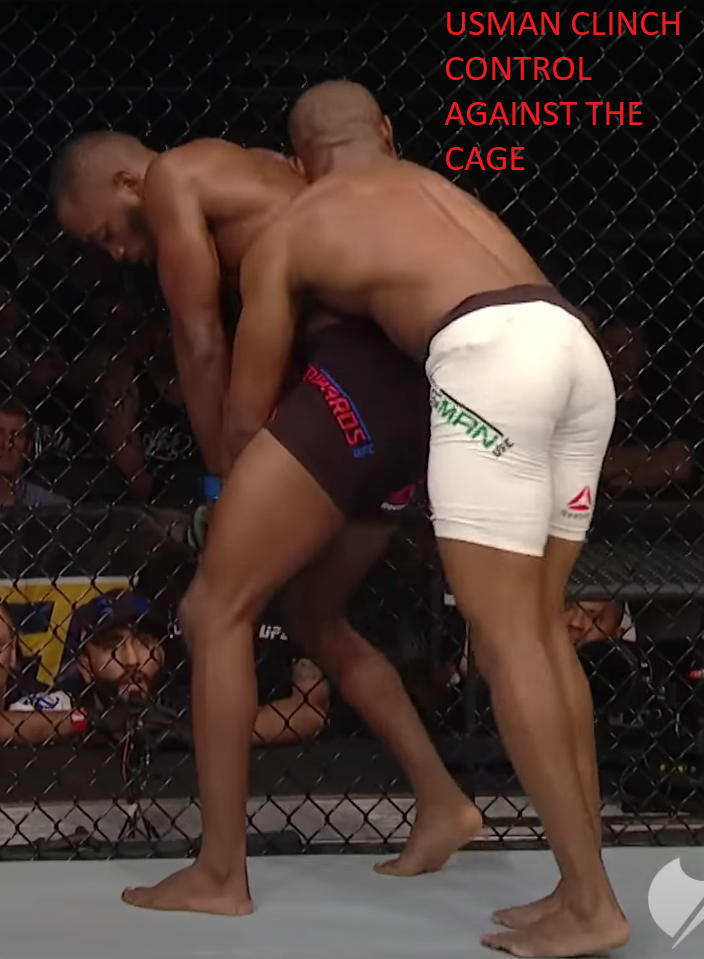 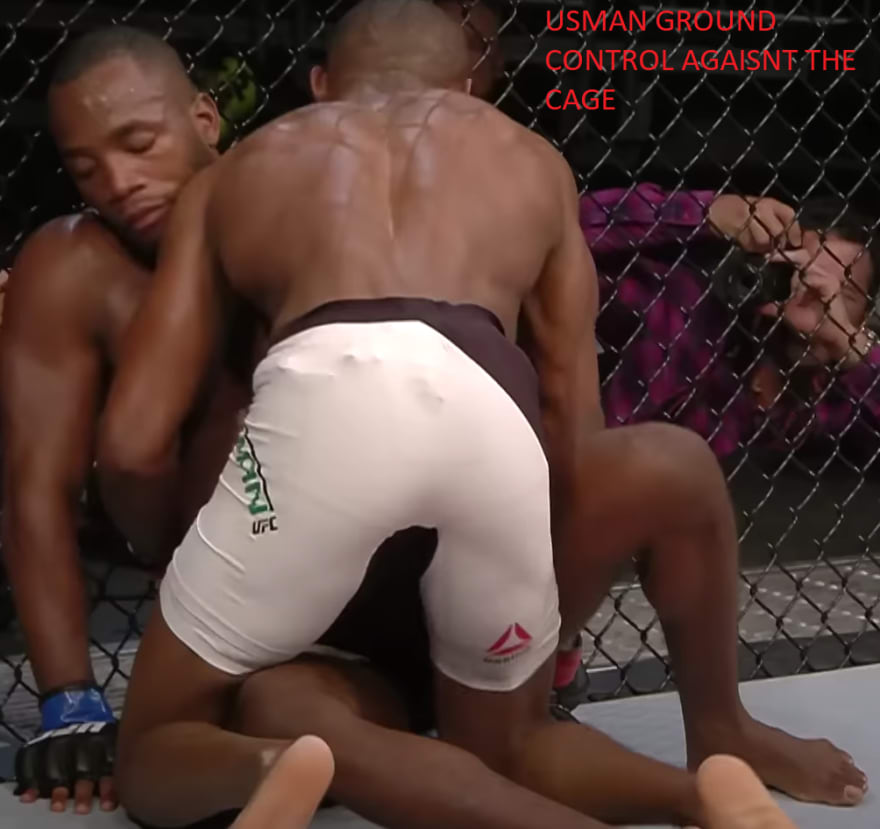 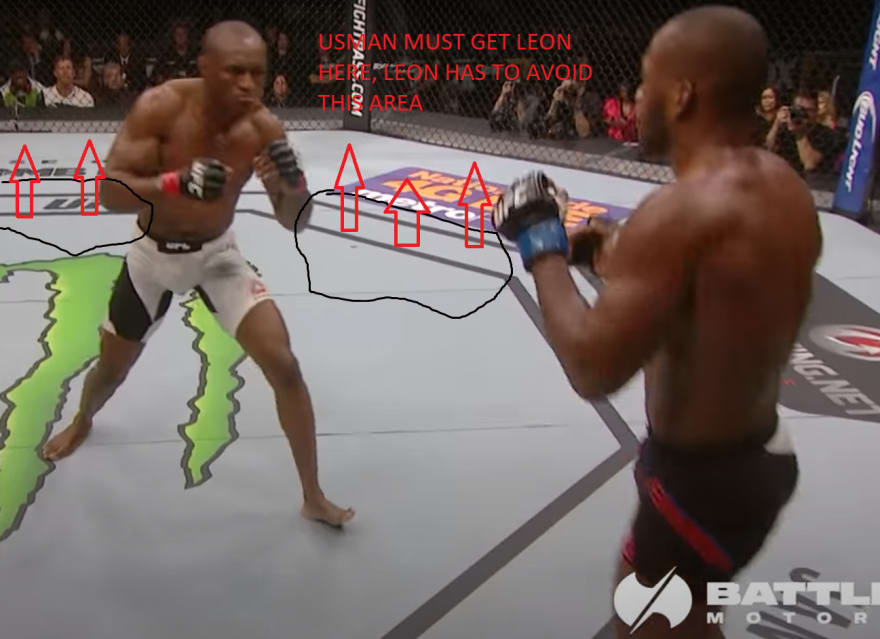 It's going to be a very "chess style" type match up, with both trying to out technique the other, I'll probably do a post on my bets for this weekend later on, but a little insight for you lot, I am rolling with Leon in this one as I truly believe he has gotten far better, than the Leon we knew in 2015.

On to the next one... The next UFC is November 5th! Marina Rodriguez vs Amanda Lemos

Looking ahead to UFC 281

Once suspended, louisingro will not be able to comment or publish posts until their suspension is removed.

Once unsuspended, louisingro will be able to comment and publish posts again.

Once unpublished, all posts by louisingro will become hidden and only accessible to themselves.

If louisingro is not suspended, they can still re-publish their posts from their dashboard.

Once unpublished, this post will become invisible to the public and only accessible to Louis .

Thanks for keeping This MMA Life safe. Here is what you can do to flag louisingro:

Unflagging louisingro will restore default visibility to their posts.