I had just had an amazing experience at Master Toddy’s gym in Thailand, I returned home and got back to training with Paul. I had no fights lined up but then one came up on 10 days notice against Iman Barlow (she needs no introduction in the Muay Thai world!). Iman had a vast amount of experience on me, I was only 10 fights in to my fighting career but I was more than happy to take that fight. 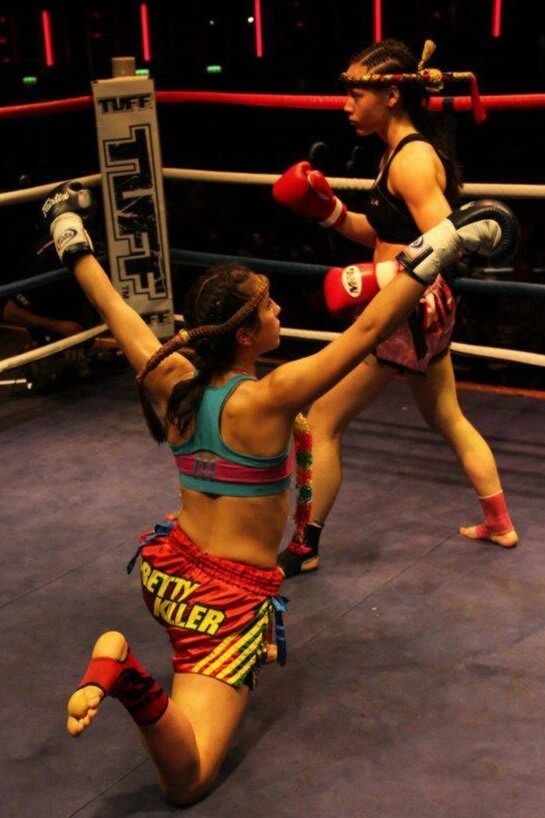 It was in London at the o2 arena which was another cool show. I had Paul and Michael in my corner for this bout and I had to do the Ram Muay on this occasion which I wasn't pleased about but never the less I got it done and the bout got started.

The first round was pretty good! I held my own, landed some strikes but I realised after, Iman was just starting to warm up ha! Round 2, she started picking me off a bit more then Round 3 she landed a beauty head kick which ended the fight. Her shin landed across my head and even though my eyes were still open and I knew what had just happened (kinda). my legs weren't partaking as they just gave way and I slowly crumpled into my corner where Paul waved the fight off.

It was a learning curve and again one I'm glad I got to experience. After this I fought a few months later and lost that fight on points. I'd had 4 fights in the space of 6 months so I decided to have a little time off from competing after that last fight, I still continued to train 6 days a week but just enjoyed the process with no added pressure of competing.

A year later I went back to competition and guess what...lost again!! Three loses on the trot it was quite disheartening, it's never nice to loose but it happens I just had to keep training and improving. 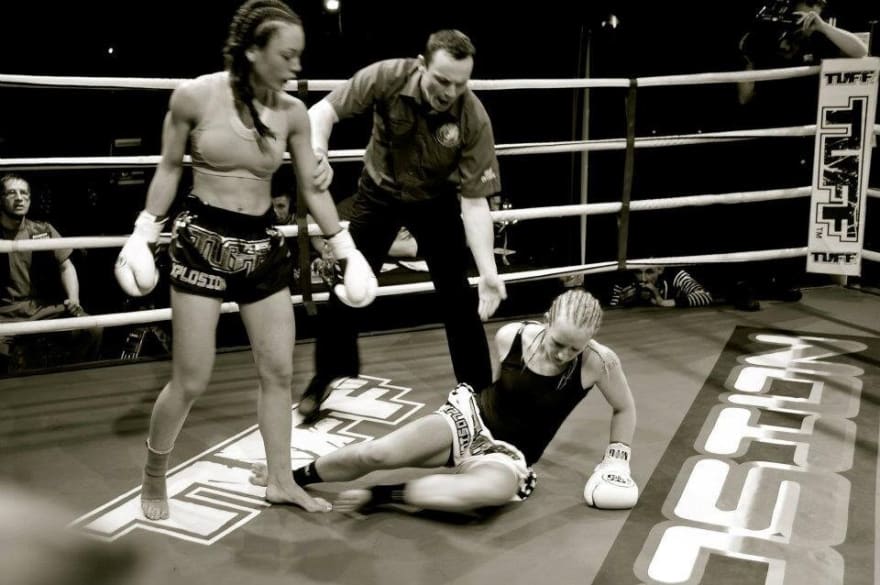 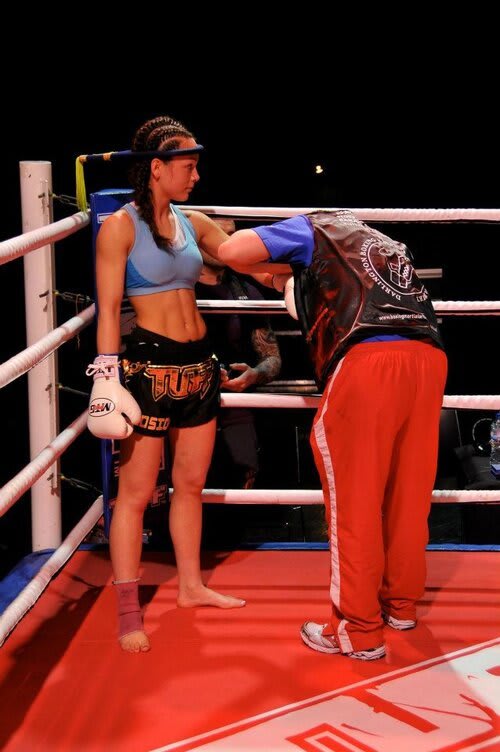 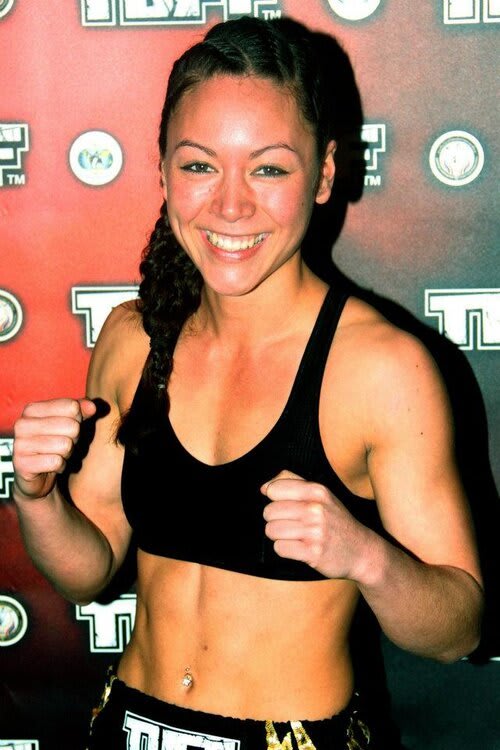 So that I did. I got matched a couple months later to headline an all female show run by Tricia McKeary against a solid opponent at 50kg. So I went down a weight category and took on at the time the current No.2 ranked female fighter Michelle Clayton. I remember we were all given the same room to warm up in so we went and found some other function room to warm up and hit some pads. I was nervous as hell, my legs felt like jelly but before I knew it, it was my time to shine.

We were just about to walk out when my opponent remembered she still had her contacts in so we waited about a little longer until she was ready. Paul said she wasn't ready for this fight and that I was going to beat her. Going into the fight she was known for her boxing and I was worried I was going to get knocked out so I told myself to keep my hands up at all times! She also had 'Destruct' and 'Destroy' wrote on her shorts and had brought a coach load of people to cheer her on. I had brought Wil haha!

It was a great fight, she was stood quite heavy on her lead leg and slightly side on (boxer-ish stance) which opened up low kicks nicely, which I would then follow up with my left body/high kick as that was my fave but it was also working well. Paul continued to yell instructions and I just remember being utterly focused and in the moment throughout. Everything I had drilled, worked on, trained for up until that moment had come together and there was a shift in my mindset and confidence. I'm not sure what caused it but I'll include a clip below with some highlights from the fight and Paul says in between rounds 'It's about time I got you fighting properly'...FINALLY! Ha!

It was a great fight and I was on a high the whole way home. My birthday was a few days before the fight so I’m glad I got a win as I had a holiday booked to Spain with a couple nights in Ibiza with my bestie Sarah-Jane so the next day I was sunning it up with a cocktail.

I was due to fight another top opponent later that year which I was really, really looking forward to but it fell through so I just continued to train as normal until the tides turned and I took an MMA fight!

So I had been dating Wil for 6 years by this point and he was an active MMA fighter, I had done little bits with him in his classes and started BJJ but I was always worried if I got injured it would effect my Thai Boxing so I flitted in and out. I was learning more about MMA and knew eventually I wanted to go down that path but I was more than happy with where my current journey was going, however just before Christmas that year Dale Percival (MADE4THECAGE) had put a post up that he was looking for a Pro Fighter at 52kg to fight Michelle Nicolini (then 7x World BJJ Champ) and I just knew I wanted that fight. It’s probably crazy looking back but we all have a little crazy in us to do what we do I reckon ha! Anyway I called Wil, who eagerly awaited what I had to say as he had seen the post but didn’t want to influence my decision, I said ‘I want that fight’ and that was that. I started my MMA career.

I sometimes wonder how far I would have gone in Muay Thai if I had stuck to that path but I don’t regret my decision that day. I could have always gone back to Muay Thai after the Nicolini fight but I was happy and hooked on MMA so that became my new path.

I’ve already wrote a blog post about that fight which you can read ‘here’.

If you’d like to here about how my MMA journey unfolded let me know and I’ll continue the blogs, hope you’ve enjoyed reading them so far and thank you!

Shout out to my sponsors:

Functional Self (use code GREEN5)

Everyone is in "Full Circle" (Fight Card Update)

Once suspended, meangreen will not be able to comment or publish posts until their suspension is removed.

Once unsuspended, meangreen will be able to comment and publish posts again.

Once unpublished, all posts by meangreen will become hidden and only accessible to themselves.

If meangreen is not suspended, they can still re-publish their posts from their dashboard.

Thanks for keeping This MMA Life safe. Here is what you can do to flag meangreen:

Unflagging meangreen will restore default visibility to their posts.