Jiu-Jitsu is the marquee position of Brazilian jiu-jitsu. It’s dominant & a real proof of Brazilain Jiu-Jitsu technique for the individual who attains it. When a BJJ practitioner applies the Mount, it’s automatic for the viewers to assume that he overcame defenses & has a high level of knowledge and skills.

If you get flat on the back in some street fight with an opponent sitting on your chest the position you will be in would be called the mount. It’s one of the worst BJJ situations you can get into. The person at the top takes all of the advantages – gravity, reach, targeting & mobility – he can drop some devastating bombs on the face at will.
For the mounting position, you must be in the absolute dominant position. In combat sports & grappling games such as Jiu-Jitsu, the mount position is considered the dominant position.

If you’re in the position of who is holding the mount, it’s totally up to you whether you deliver punches & elbows or isolate your opponent’s arms and neck for administering different attacks. In the mount position, the person at the bottom must know how to escape the mount for being in a better position. 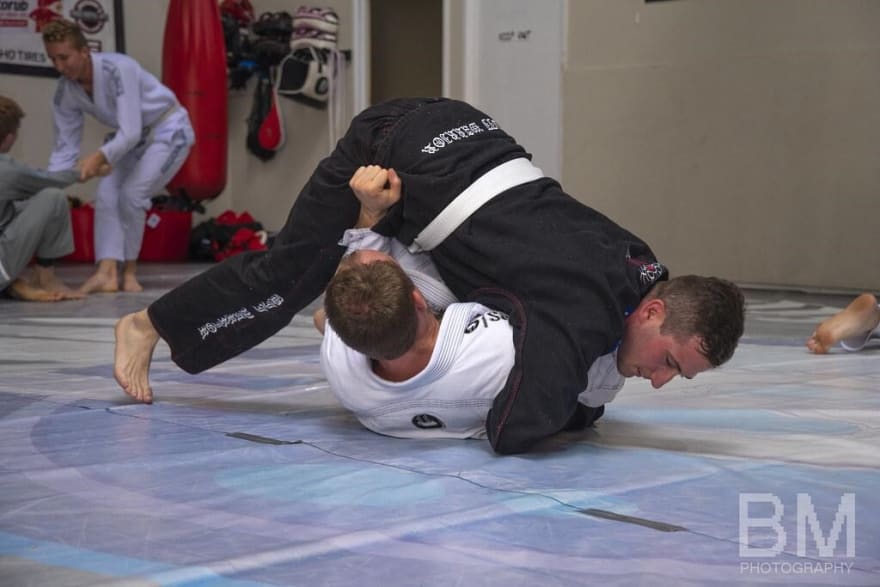 What makes mount so dangerous?

Mounting is so dangerous because it gives all the advantages to the guy who is on the top. It includes power, reach, mobility, gravity, & targets. Running isn’t an option for a person who is stuck under the mount. He gets glued there as long as his opponent makes him stay there.
The bottom position makes the punches pitifully weak. Also whatever you try to do from the bottom he can execute it in a better way from the top. Moreover, the top position effectively increases your opponent’s reach.
A BJJ saying states “Survive first, win later“, so the next thing we are going to tell you is how you can survive the BJJ mount before we get into it. Make sure you suit yourself with premium quality BJJ Gis and BJJ gear.

Your ability to survive a Brazilian jiu-jitsu mount depends on how capable you are to get at your side while fighting under the Mount. The quicker you grasp the technique behind it, the better you will be able to defend it. For doing so you will be required to work on some simple drills so you can stimulate the muscle memory.

I do it by laying my back flat on a jiu-jitsu mat, then I put both of my hands in the defensive position & bend both of my knees to counter the coming movement. I believe that surviving a BJJ mounting position is difficult, as it will allow my opponent to attack both sides of my body.

I practice this certain drill which is very helpful for me to survive. I use my right leg, for slightly pushing off the BJJ mat for elevating my hips & lightening the left leg. Then I begin to shrimp the hips to my right so the body faces towards the left. This is my mount defense posture. Once I execute it I keep both of my hands in the defensive posture while cocooning my body to solidify my base further.

You might have observed in fighting clips that one of the guys tends to get on the top. That’s a natural human reaction. The person on the top holds the potential of ending the fight that encourages him & allows him the second wind. Even if you get under the amount your foremost jobs should not get carried away by that fusillade of hard strikes.
You are going to get hurt if you get in the bottom position, no technique will save you from those blows 100%, but you must stay calm while realizing that these strikes are survivable.
Any strike to your head can hurt you, but the blows to sensitive parts might hurt more. A person sitting on the chest will punch downwards, which means you must protect the target number one is chin and the other is a temple. Also do not expose your nose, common instincts related to being pushed down to the bottom position are not protecting those places.
Pushing your opponent with straight arms can make you swatted at the side. The effective defensive position you can be in while you are under the mount is following a technique called ‘the helmet’. This position covers the knockout points of your head. You can do it by following these steps:

● Start by gluing both of your fists on the temples
● Then bring the elbows together at the front of the face
● After that, offset one of your elbows slightly higher than the other for closing the biggest gaps.

Doing this will reduce the punching impact. Another approach to defending the punching barrage is by bear-hugging around your opponent’s chest or waist. Do it by pulling him closer to you and gluing the head against him. Doing this will make him force his hands while reducing the punching power.
Doing will lessen the damage that you will experience while being in that position.

Escaping a jiu-jitsu mount involves multiple foundational skills of BJJ. There are a lot of approaches for escaping the mount position, however, not all of them are equally suitable and effective in certain situations. Few mount escapes demand the hands to stay in the low position while allowing the opponent to get free access to the face. Other escaping techniques demand certain attributes, such as flexibility, strength, and explosiveness.

As per my experience, the highest percentage of escaping the mount is fundamental to the ‘up or ‘bridge & roll’ technique. These are relatively simple and easier which do not require a high level of athleticism, keep you safe, & will limit your opponent’s range of motion. This space is most practiced in MMA.

Bridge & roll is the classic Jiu-Jitsu technique. The next approach is breaking your posture forward. From the strict context of grappling it’s highly common that both of the opponent’s hands will be planted firmly on the floor, but during the fight, the opponent might sit in a more upright and straight position. The upright position enables the opponent to punch you right in your face, & also for riding out the bridge. Modification is combining the bridge with the thigh bump of your buttocks.

You are not going for the knee striking of the kidney, or breaking the pelvis, or snapping his spine by using your knee or doing crazy moves like them. The goal of performing the one-legged bridge & thigh bump is breaking the posture forward, in a way that they can secure your opponent’s arm & move to the action. Once you are done planting his arm successfully on the floor perform the following steps:

● Start performing this by securing one of your arms on the chest by using the variety of grips
● Then step over your opponent’s leg at the same side as the arm by using on the legs
● After that bridge the hips at the height as you move forward up towards the sky
● And finally, roll over at the side & get on the top.

This will require a lot of practice, by doing it over and over a few times, you can avoid huge mistakes. The key point for making this particular technique is performing progressive resistance: you must train yourself against higher resistance and develop endurance for overcoming them.

It's Technique Tuesday #1 🛠 How to do a D'Arce Choke like Khamzat Chimaev performed on Kevin Holland.

The current state of 3 MMA legends

Has the Absolute Disaster Leading up to UFC 279 Been Planned All Along?

Once suspended, mikeee will not be able to comment or publish posts until their suspension is removed.

Once unsuspended, mikeee will be able to comment and publish posts again.

Once unpublished, all posts by mikeee will become hidden and only accessible to themselves.

If mikeee is not suspended, they can still re-publish their posts from their dashboard.

Once unpublished, this post will become invisible to the public and only accessible to mike jones.

Thanks for keeping This MMA Life safe. Here is what you can do to flag mikeee:

Unflagging mikeee will restore default visibility to their posts.