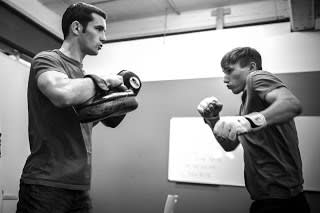 Here are some of the most common ways in which fighters sabotage their potential success in the sport of MMA.

1. Training with coaches who don't understand the sport of MMA. The coach may be skilled in individual areas such as striking or BJJ but lack the ability and experience to prepare fighters properly for MMA.

2. Failing to fix the holes in your game and being too reliant on one skill set. An MMA fighter needs to be skilled in the areas of striking, takedowns and groundwork and be able to combine them. Focusing on only one area at the expense of other skills will leave holes in your game which will be easily exploited by opponents.

3. Jumping into professional level fights too soon without adequate amateur experience. Amateur fights are necessary to develop and build up your skills and experience. Its very important not to fight above your level too soon as a bad loss may be very demoralizing and affect your future training and performance in fights.

4. Failing to get experience in individual combat sports such as kickboxing and BJJ before fighting in MMA. Competing in other combat sports is a good safe way to gain valuable experience and develop your skills so that you are more well rounded and more of a threat when you fight in MMA.

5. Too much Sparring - Focusing exclusively on sparring rather than taking the time to develop your skills in each range. Making an effort to develop your BJJ, Wrestling or Muay Thai skills individually will give you more weapons to use in when you fight.

7. Too much conditioning training at the expense of skill development training. It won't matter how good your strength or cardio is if you are making basic mistakes which could lead to losing a fight and which could be corrected with proper technical training.

8. Neglecting your conditioning and hoping that you'll be able to get by on skills alone. The fighter needs to prepare for the worst case scenario. This means being prepared to push the pace throughout the duration of the fight without being afraid of getting tired.

9. Not getting enough information about their opponent. Fighters need to find out as much information as possible about their upcoming opponent such as their strengths and weaknesses or how they have won or lost their previous fights. This information can give the fighter a huge advantage over the opponent.

10. Inadequate mental preparation - ignoring the nerves and pressure of the upcoming fight until its too late rather than mentally preparing for the fight so that you are ready to deal with the stress before the fight and calm and focused when the fight starts.

'One thing I have learned as a competitor is that there are clear distinctions between what it takes to be decent, what it takes to be good, what it takes to be great, and what it takes to be among the best. If your goal is to be mediocre, then you have a considerable margin for error... If you hurt your toe , you can take six weeks watching TV and eating potato chips, most people think of injuries as setbacks, something they have to recover from or deal with... every time I tweak my body well intentioned people suggest that I take a few weeks off training. What they don't realize is that If I were to stop training whenever something hurt, I would spend my whole year on the couch. Almost without exception I am back on the mats the next day figuring out how to use my new situation to heighten elements of my game. If I want to be the best I have to take risks that others would avoid, always optimizing the learning potential of the moment and turning adversity to my advantage.'

Josh Waitzkin - The Art of Learning.

McGregor is still the money fight in the lightweight division, but is it the fight he wants?

Who is the biggest weight bully in the UFC?

So this is going to be a banger then..

Once suspended, steffblazin will not be able to comment or publish posts until their suspension is removed.

Once unsuspended, steffblazin will be able to comment and publish posts again.

Once unpublished, all posts by steffblazin will become hidden and only accessible to themselves.

If steffblazin is not suspended, they can still re-publish their posts from their dashboard.

Once unpublished, this post will become invisible to the public and only accessible to SteffBlazin.

Thanks for keeping This MMA Life safe. Here is what you can do to flag steffblazin:

Unflagging steffblazin will restore default visibility to their posts.