I didn't have much of an amateur career in Muay Thai, my first two fights I wore the protective gear but then after that they came off and I was fighting in 8oz gloves. I still only ever fought 5 x 2 minute rounds though, I didn't make it to the 3 minute rounds.

My third fight was up in Glasgow against a Scottish girl. I was so nervous (you'll hear me repeat this as I talk about each fight even today), I remember putting the fight gloves on and thinking they felt like little mittens and wondering if it was going to hurt more getting hit...turns out I ended up preferring to fight without the shin guards, head guard etc so that was a bonus.

Thai oil was applied, pre fight pads were done and I was up next to fight. I was made to wait outside the sports hall with my opponent literally stood a few feet in front of me and I couldn't stop starring at her thinking she looked hard as nails...how you can tell that from the back of someone's head I don't know but I did know the Scottish were and still are known for their gameness and they always came to fight! I wondered if she was going to brawl or be technical, I wondered if the crowd was going to be hostile and my legs started to feel really heavy. Paul stood directly in front of me so I couldn't see her any more as he probably sensed I was going overtime with the mental battle.

I was called to walk out and I got a steady clap from the crowd then my opponent came in next and the place went mental. As she stood across the ring from me she was so hard faced and I remember thinking, 'Fuck, this is it'. Likeliness is though, she was probably just as nervous as me.

The bell went...so off we went. There was a small team of people from DBMA and they all cheered for me whenever I landed a clean strike and likewise, the crowd would cheer for my opponent. I remember thinking I best do something every time I heard the crowd cheering as it must mean I was losing. There were some quieter moments during the bout and I knew at the end of those 3 x 2 minutes rounds I had done enough to win. I got the decision victory and I was so, so happy. That car journey home was a pleasant one. (Coming up later down the line is the car journey home from Glasgow in complete silence after a terrible fight). 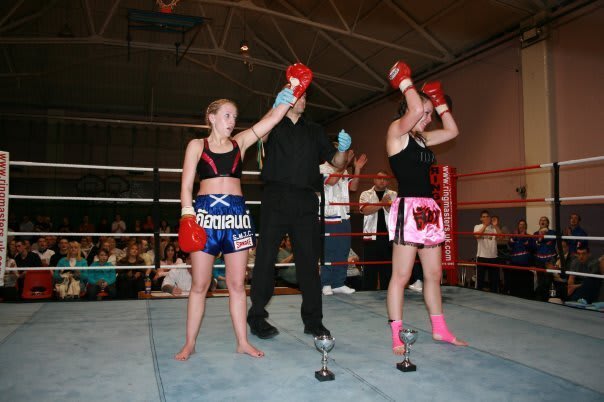 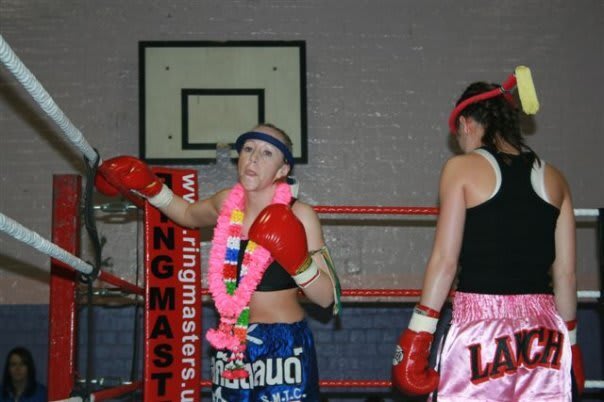 Glasgow around 2006 and team DBMA cheering to the right!

I had left school by this point and was studying Art & Design at Darlington College. I loved this course, although I was a bit of a rebel sometimes at school I actually really enjoyed being there, I love learning and College was even better because it honed in on all my favourite subjects.

My mum was also still unaware that I had fought in Thai Boxing, I have her Thai skin so I rarely got black eyes or bruised so I would tell my mum I was going to watch others compete...she might have known and just never told me, but it's not a conversation I’m keen to bring up ha!

My next fight took place at The Dolphin Centre in Darlington. Paul put on amazing shows here, VIP tables, a live Saxophone and Bongo Drums guy as fighters walked out, fireworks, lighting, it was all really cool. My brother had come to watch me fight and was sat ringside as well as my best friend Sarah-Jane and obviously everyone from the gym so it was a great atmosphere! I had just started dating Wil at this point too and he was also fighting on this show but in MMA...I didn't even know what MMA was at the time!

Anyway, I was fighting an Italian girl. I had plaited my own hair, designed and made my own Thai Shorts to wear and bought a new black sports top for the occasion.

The Italian girl walked out first. I was up next and I remember peeking out and thinking 'Holy shit there's a lot of people out there' so I asked Paul to walk out first. He said no, that I was the one fighting so I have to walk out first. They announced my name, played my walk out song (which was ‘Clubbed to Death from ‘The Matrix’…I was watching this on repeat with one of my besties Sarah-Jane at the time!) and off I went, head down, not making eye contact with anyone and making my way to the ring. 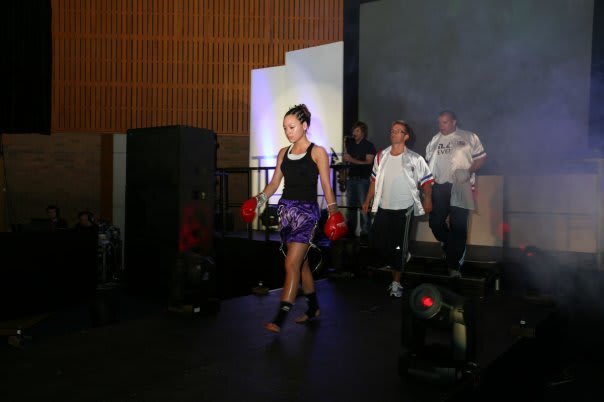 Despite being nervous as always, I was smiling on this occasion and feeling ready, the added cheers from everyone supporting gave me an extra boost of confidence. The bell went and we got to it, I remember being technical and aggressive (Paul's style, be first and go forwards!) but also seeing a lot of stars as the Italian chick could bang! I remember Paul shouting 'you're alright, you're alright' and it reminded me that I was, it was a good match and I won this fight on a decision victory. It was amazing to share it with my only family member that supported me, my brother who had ran up to give me a huge hug after I had gotten out of the ring and also everyone else there supporting too. Wil also went onto win his bout, by RNC and if you check out the photos you'll also see a young Pete Irving in there reffing!

For me, fighting was never a priority, I trained 6 days a week regardless, sometimes twice per day but purely for the love of the sport, the training and the person I was becoming by doing so.

If you’re looking to compete, just put the work in, be consistent, be present in the sessions and soak up as much knowledge as you can when you can. Believe it or not I used to be that 6am runner, as much as I hated it but if it was going help me improve I’d do it. I’d have my clothes laid out the night before ready for when my alarm went off to just get changed and go…no time to talk myself out of it! There’s gonna be sessions you don’t want to do…I don’t long distance run anymore but I do sprints once a week when preparing for a fight and it’s the session I dread but weirdly welcome at the same time. I know it’ll be horrendous for that 45 minutes but after, when I’ve pushed myself to my limit, gritted my teeth and got the work done it’s a feeling of satisfaction, knowing I’m doing what I need to do in order to achieve. Even setting yourself small tasks and goals such as hitting those 10k steps a day or finishing you’re two litre water bottle for the day, anything like this, doing what you set out to do will bring a sense of achievement. Have a think about what goals you could set, if you’re struggling just drop a comment below and if I can help I will do so.

So, I continued with college then went off to start a degree in Fashion Design (you wouldn't think that judging by how I dress these days) but that became my early adulthood life… training, studying and working part time as a receptionist at a Peugeot Car garage in Darlington. 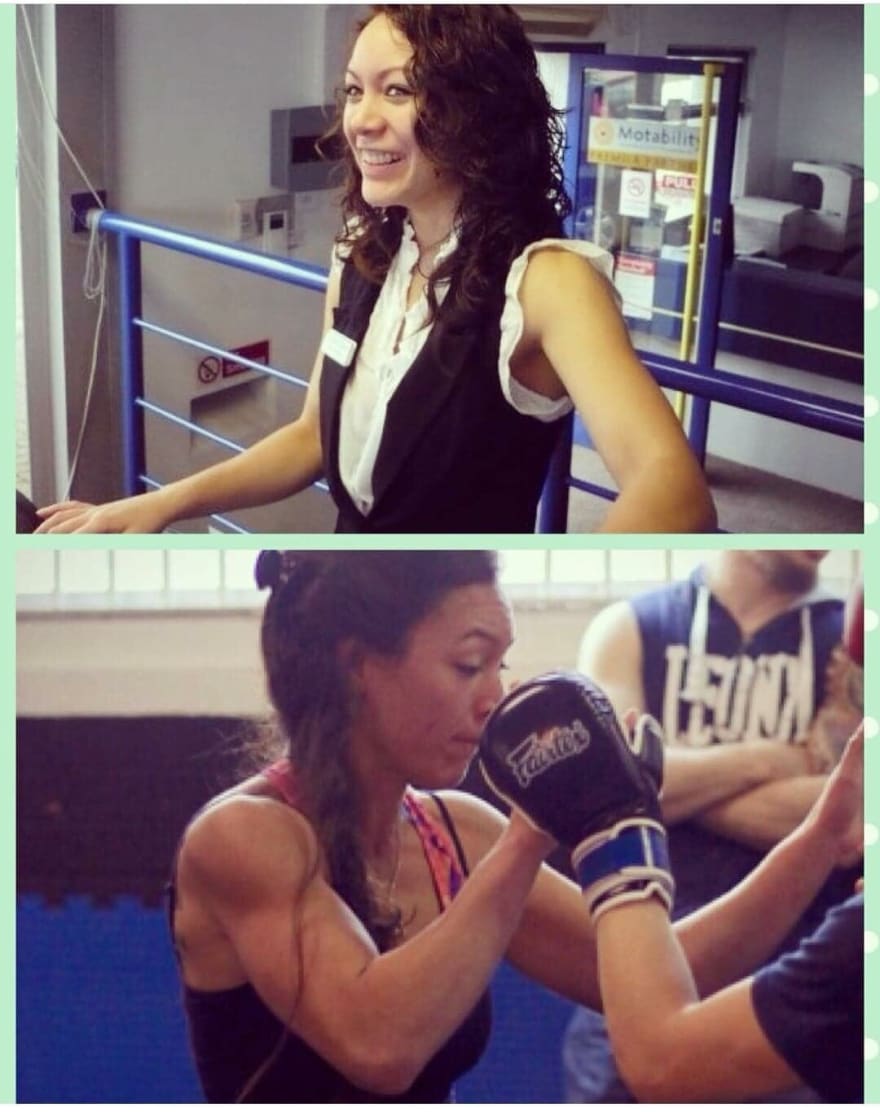 Just thought I’d include this! The photos are taken approx 12 years apart… I put up a post a couple years ago, saying I used to think I had muscly arms when I started Thai Boxing… I totally didn’t ha! But over the years, training paid off mentally… and physically!!

Thanks again for reading, next up will be a few more regional and international fights as well as a break away from my arty, farty side!

The biggest fight I have is with my weight.

How to avoid hesitation or 'choking' in MMA

How to set goals in MMA