I was a contestant on The Ultimate Fighter, Series 23 ! 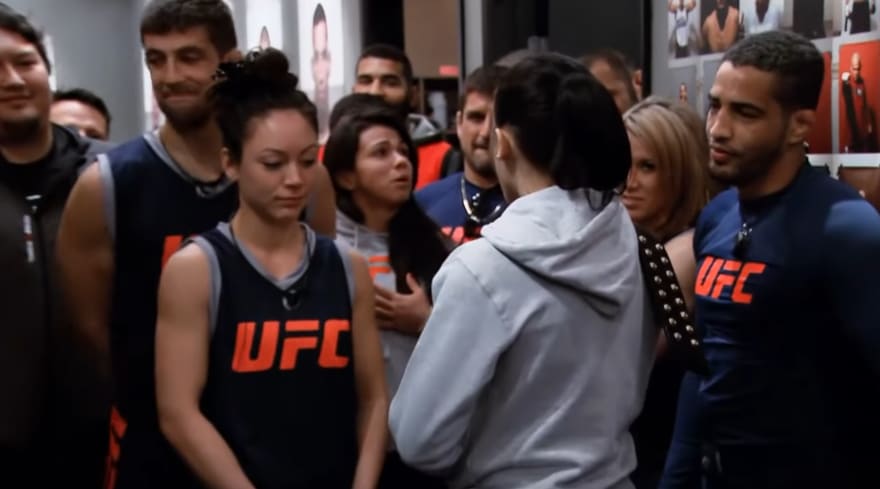 It was a while ago and Claudia Gadhela's coaching team were brilliant. Their kindness, their support, not to mention the mass of experience and knowledge they had between them all. I'll never forget it! So when an offer came up to train with some of them after the show, it was one I couldn't refuse.

It was Rafael who mentioned on numerous occasions that I would be welcome to go over to Brazil to train at Nova União and to stay with him and his family.

As soon as I arrived back in the UK I told Wil the crack and he was fully on board. We agreed I needed to go for a minimum of a month. I wanted him to come with me this time, we had already been apart 7 weeks, so I used the coaches challenge bonus to book up some flights and two weeks later I was in Rio.

Wil couldn't leave the gym for a full month so he was going to do a two-week stint in the middle of my four. Here's how my first week panned out...

So Friday night I land in Rio de Janeiro, Rafael and Claudia are there to pick me up, it's about 8 pm in the evening and absolutely sweltering! I get introduced to Claudia's crazy driving as we cruised the streets of the city before she dropped me and Rafael off at a taxi rank as we needed a smaller vehicle to get up into the favelas where Rafael lived.

Now, coming from Darlington in the UK and having also stayed in some less economically prosperous places in Thailand as a child such as the small Thai village where my family lived, a pretty typical place, Thai toilet, no hot water, little furniture etc. I thought I was fairly well prepared for what lay in store in Rio and wasn't expecting to rock up at the Ritz. But man, I still got a shock when I passed through areas near where Rafael lived, the Brazilian favelas are quite breathtaking and the poverty is really quite apparent as soon as you enter the area, but Rafael's place, whilst modest, was extremely welcoming, like a typical Darlington or Thai family home and I was really grateful for somewhere friendly to stay. He introduced me to his wife and son then I got some sleep.

Saturday morning I went to the open mat and almost cooked alive in my gi. Training in a gi, in a room of 20-30 people with no air coming in and an outdoor temp of 35 degrees centigrade is something I will never, ever get used too but I had to find a way to deal with it for the next month!

By Sunday I was done in, sunburnt, covered in mosquito bites, heat rash and managed to get food poisoning. I was in the bathroom every hour from midnight through till the next morning. I missed training that day and felt like utter shit. My Portuguese was extremely limited from my two week Duolingo prep so trying to ask Rafael's wife for help was done solely through sign language.

By Tuesday I was starting to feel safe without a toilet nearby so I went back to training.

I have walked into new gyms before but this was something else. I was terrified once again. I felt the target on my back, I was the gringo who doesn't speak their language, just some tourist here to train. I knew I just had to propel myself into every situation there was, I didn't expect anyone to try to talk to me in English so I never asked anyone to translate instructions, I usually figured out what we were doing by demonstration. MMA is a universal language.

I went to the ladies only BJJ with Michelle Tavares, a highly accomplished female BJJ black belt who also competed in MMA and from what Rafael said she was one of if not the first female from Brazil to fight. (Don't quote me on that though, something may have gotten lost in translation!). Anyhow, I got to train with this amazing lady and a whole bunch of girls including Poliana Botelho which was great.

I soon realised there's a high work rate, it's go or stop and it dawned on me that this was going to be one immensely intense 4 weeks if every session was this pace...it turns out it was and I actually felt broken by the end of the first week. 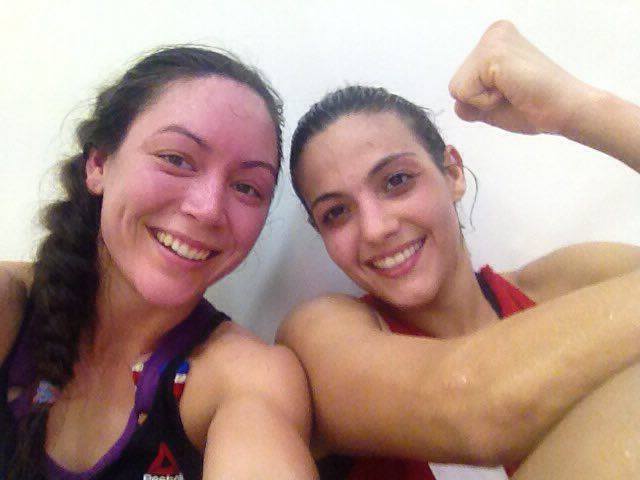 So during that first week, I hit quite a few sessions, couple that with the journey back to Rafael's house, it was tough. I weighed my rucksack after training it was 10kgs + with all my sweaty gear, I would get the tube then walk to the first set of stairs I had to face to get up into the favelas. I would grit my teeth and get up the first set, then I had an inclined slope before I hit the second set. By that point, I was so fucking tired I thought that if I got mugged right at that moment, I wasn't going to be running away very fast, in fact not at all! I would literally be dripping in sweat by the time I got home. 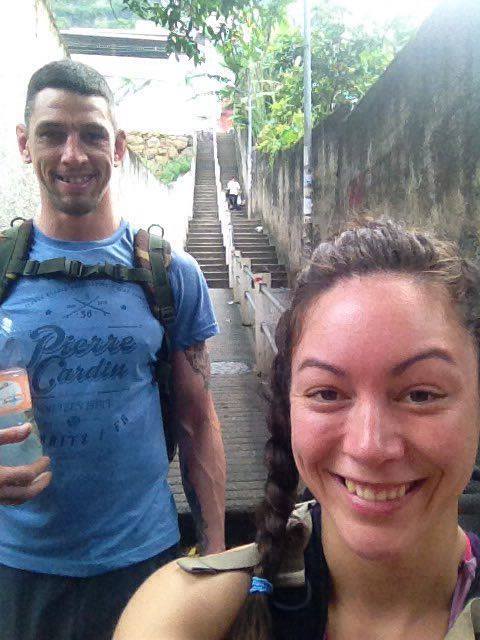 That week I also had my first sparring session, it was a surreal experience whereby you have to step onto the mat first to get your go and as you waited you would act as a wall to stop fighters landing on the tiles, it was just totally new to me. I was so nervous, I did a couple short rounds then there was a 75kg girl going next and no one stepped up, I wasn't going to either but then they prompted me to go and changed the 2-minute rounds to 5 minutes...I figured this is it, here's the gringo test.

I did my best to stick and move but then she managed to launch me sky-high and dump me with all her weight driving into my stomach, one of those moments where the crowd flinches and goes 'oooo'. It was disgusting but I knew I couldn't stay there, turned out my scrambles were quicker and I ended up in some good positions and I gained the respect of the fighters that were watching. 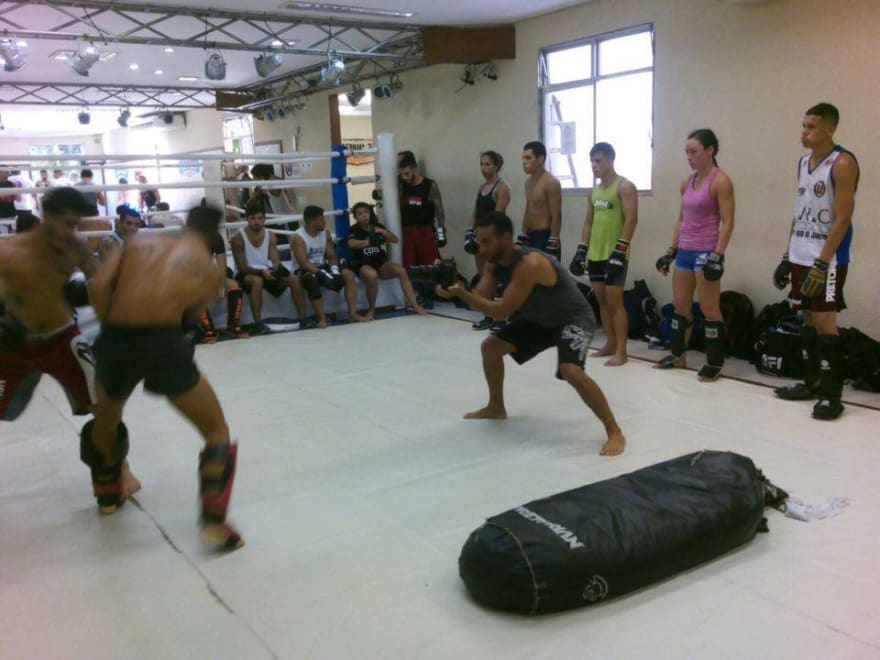 With the help of Rob Dawson from MindSport, a mental strength coach I got in touch with a couple of years ago, I came to realise that everything around me could change, the environment, the people, the language, the food etc, but not me. I had to remember who I was and why I was there. I had to have a word with myself, bat off any negative thoughts and get on with it.

Thanks to the people back home at the time that sent some positivity. Stay tuned for my next installment...it gets better, honest!