So after my pretty none eventful start to Thai Boxing, I left that alone and continued on with Gymnastics which I had started from about 4-5 years old, I then went I went back to Thai Boxing when I was about 14 years old just to casually keep fit.

I was still great friends with Nikitta at the time even though we ended up in different secondary schools. One day she asked if I wanted to go back to a Thai class and I genuinely wanted to so off we went, it was a lot more fun this time around and I really enjoyed it.

Throughout secondary school I had become quite sporty, I was on the netball team, hockey team, I even became the first female to make the Haughton Cricket Team...I made the local newspaper and everything ha! I was still doing gymnastics too...which sounds great, but I wasn't actually very good at it. I struggled with anything that required flexibility, I could only do the splits on one side, my head would hit the floor before my hands on a backward walk over and getting into a bridge?...Nah my shoulders and upper back were solid as a rock, I wasn’t great with heights so I panicked on the parallel bars and vault, I’m surprised I stuck it out so long reading this back! But because I couldn't do a lot of the regular advanced stuff...back flips, somersaults etc I worked on a lot of strength, so I was doing push ups and pull ups from fairly early on which definitely put me in good stead today as I have a fairly solid foundation in core strength, balance and coordination. I 100 percent put this down to doing gymnastics from an early age. So if you're not into martial arts...definitely try gymnastics!

So, teenage Lanch wasn't an angel at school. I was popular, I had friends, in fact there's a Whatsapp group with my old school friends in it, we still talk today and on the rare occasion we do meet up, we have THE best time. My friends helped me through a lot at school, my mum was Thai and tried to raise me with her cultural values in an English environment. It was hard and I struggled to talk to my mum as a teenager. I wasn't allowed out as late as everyone else, I wasn't allowed to talk to boys, I wasn't allowed to wear skirts, don't drink, don't smoke (understandble) don't do this, that...the list goes on and the more my mum told me I couldn't do something the more I did it with no regard to consequences so I ended up doing things out of spite, which is never a good reason! 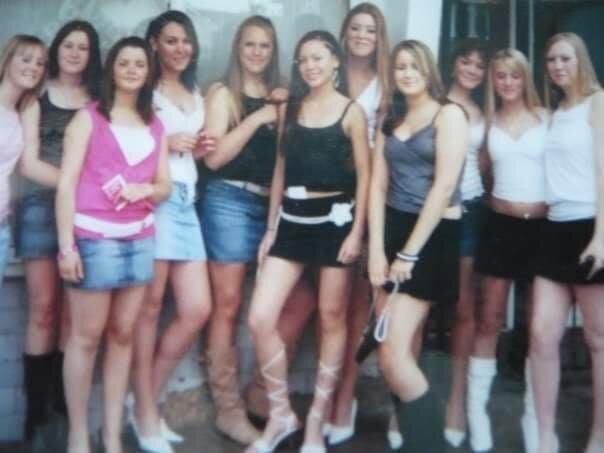 So during my rebellious teenage years I got into an altercation (you can read more about that here in a blog I wrote about bullying). Basically I got into a fight with 3 girls and got my arse kicked, it knocked my confidence so much. I told Paul about it and I went from training a couple times a week to training 6 days a week. The gym became somewhere I could escape, where I could just be myself, forget about the outside world and release any anger and frustrations I had onto the pads and bags. I picked up the art fairly quickly and my confidence started to come back, I also met so many wonderful people while training at Paul's gym. Shout out to all those guys and girls!!

By this point I wasn't really on great terms with my mum, she still didn't agree with girls 'fighting' or even training in Thai Boxing so I would tell her I was just going to the gym to get fit...which technically wasn't a lie. At this time also, my parents had decided to build a house in Thailand which would later become their retirement home, so my mum would travel back and fourth to Thailand and spend a few months there at a time which meant I was in charge of looking after my dad whilst she was away (Thai culture, the females do all the cooking and cleaning etc).

She had batch cooked a whole load of Thai meals and stuck them in the freezer before she left so it was fairly easy on my part. Every night Monday-Friday my dad would arrive home at 6pm, I'd have his meal heated through served with rice waiting on the table, I'd wait for him to finish, make him a cup of tea then sprint to the bus stop to make the 6.30pm class and this became my routine as well as a Saturday morning class.

Then around 16 years old, I had my first amateur fight! It was in Darlington at The Engineers Working Mens Club, it was the craziest experience, the crowd was so close, people could smoke indoors still, low ceilings, rowdy as hell but I was really looking forward to it, everyone from Paul's gym was fighting and the banter was great. Everything was fine...until I stepped into the ring and got hit ha!!

Fighting wasn't really in my nature, I shyed away from confrontation, I cried if my older brother was mean to me and I just didn't like hurting someone...but on the flip side, I was getting good at Thai Boxing and a way to test my skills was to compete so I decided to give it a go.

Well my skills went to shit and I got drawn into an awful windmilling brawl with my opponent. She literally ran at me as soon as the bell went and threw all her arms and legs at once, it was extremely overwhelming and I hated EVERY second of it. I wanted to get out the ring in between rounds but obviously Paul said no ha! I was fine, I wasn't getting hurt I was just all flustered and before I knew it, it was over. I'd lost the fight. I got out of the ring, back into the changing rooms and told Paul I never wanted to do that again. 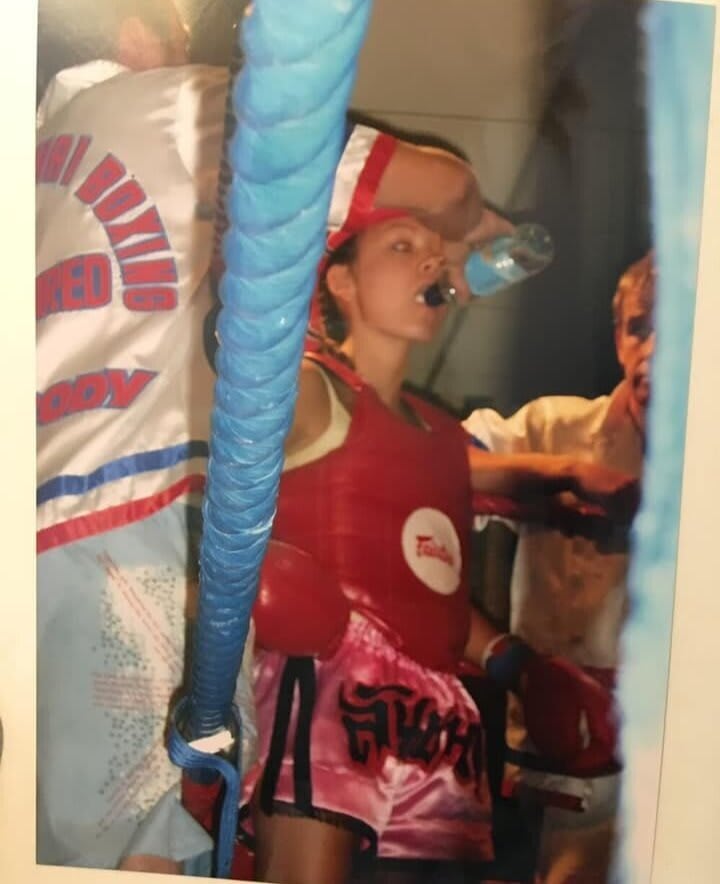 16 years old, Engineers WMC Darlington. Paul Hamilton to the right and Paul Spinks on the left.

Despite my traumatic ordeal he arranged another fight for me exactly a week later, I said he must be joking and that I didn't want to do it. He didn't except that answer either, so off we went a week later to Manchester (I think) where me and a couple others fought on a small show. I was terrified this time around, terrified that the same thing would happen, that I'd loose in front of all those people, that I wouldn't get to display what skills I had and that we would have traveled all that way for me to let everyone down.

Paul believed in me, he told me I could beat this girl, to stand strong, be first and listen.

The bell went and we got to it, it was a completely different experience to the previous week, the girl was also very technical and we had a great scrap. We all thought I had won the bout but she got the decision, I went to the toilet straight after, spewed then cried, I thought I'd let everyone down but when I came out they were all so proud of me. I had stood strong, I tried my hardest to be first and I listened, that's all Paul asked of me and I did it. But more importantly I wanted to be there and I wanted to stand and fight. That for me was a victory. 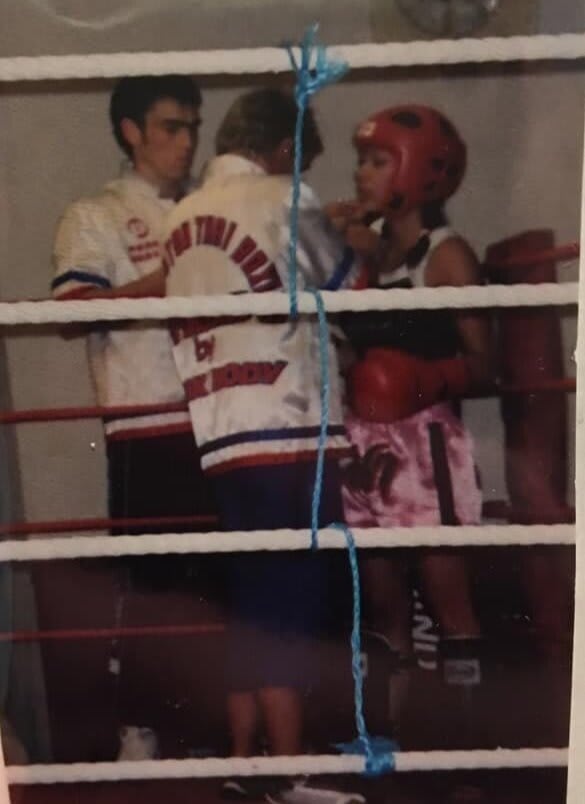 On the ride home my jaw hurt, my legs hurt and I felt physically drained but I also felt an overwhelming sense of achievement. I couldn't believe that I had just done that and it grew my confidence even more. I absolutely loved Thai Boxing and despite the ‘result’ of that fight I definitely wanted to do it again! Which I did…and continue to compete today 15 years on!

I’m so pleased I went back and pleased I found a home at Paul’s Gym. When you join a club, make sure the coach has your best interests at heart. Don't get me wrong, I didn't always like Paul, sometimes I'd walk home thinking how much I hated him (soz Paul) he was so blunt and straight to the point, if I sparred terrible he'd tell me about it, I hated running...but you guys know that already ha, some of the training sessions were so disgusting I wanted to cry and he wasn't exactly generous with his praise but Paul didn't let me quit, he always believed in me and made me realise I was a lot more resilient, tough and courageous that what I once thought. For that I am forever grateful because who knows what I'd be doing now... 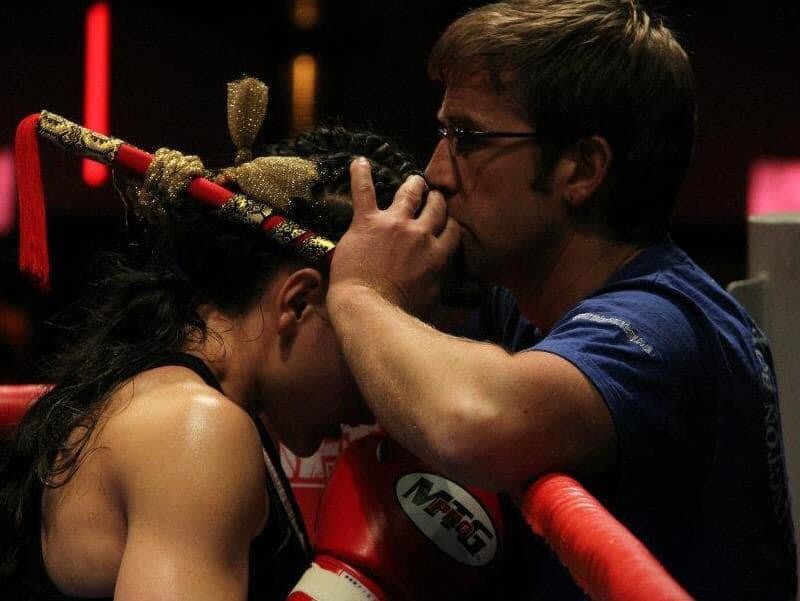 Stay tuned for the next chapter, plus more embarrassing old photos!

A beginners guide to the PFL (Professional Fighters League)