Coming off a great win, my next fight was fairly soon after. I was headed back up to Scotland to face a really strong, young opponent who was smashing it at the time...and still is, Amy Pirnie has gone on to become 3X World Champ. I was feeling fairly confident on the journey up. It was just me, Paul, Wil and a Thai trainer who Paul had over at the gym called Gae, he's world famous now so if you're in the MuayThai world you'll know who this is and if you've ever trained with him you've most definitely been kicked off your feet a few times! 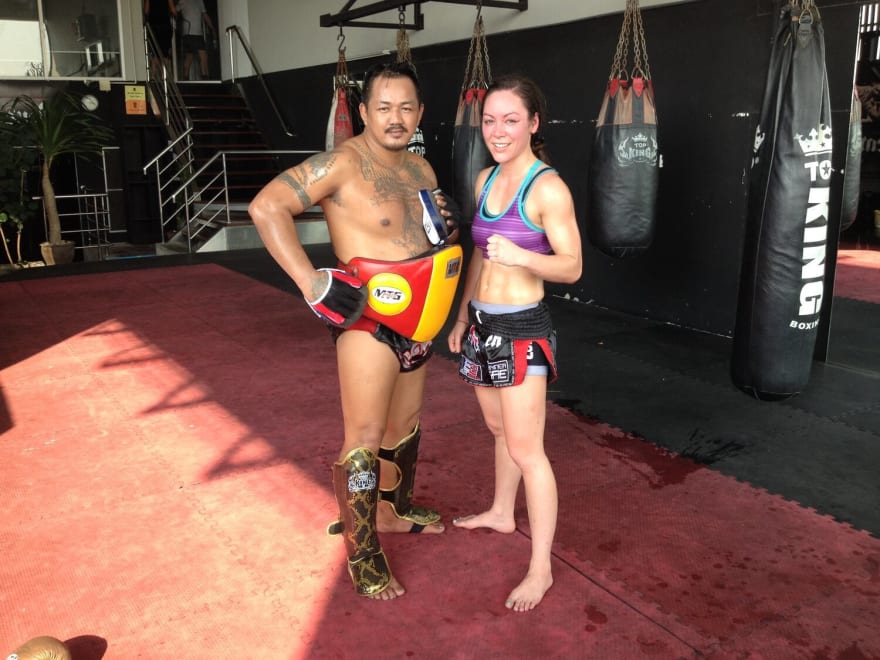 Pic: Around 2015, I was visiting my folks in Thailand so dropped in to do some training with Gae…horrendous!

Gae warmed me up for this fight and no word of a lie, it hurt more than the fight did. He bent my joints back, dug his elbows in, pushed on my stomach so hard I thought I was going to puke but I figured if I can go through that, I can get through the fight! I remember waiting to walk out and I desperately needed a wee, it was a nervous wee but never the less I needed to go but I was all gloved up. Wil had to come into the ladies toilets with me and assist...I always remember to have a 'final wee' before I get my gloves on after that night.

Well off we went and holy shit I'd never been teeped so many times in my life! I had also never kicked someone's elbows so many times with my feet. I had the most terrible performance, my distance was off, timing was off, I felt slow and just a step behind my opponent throughout the entire fight, unfortunately no amount of shouting from Paul, Wil or Gae was helping. The bell went and I knew I had lost. I hadn't done what I was supposed to do and that...that is the worst feeling after a fight. I got the whole 'you could have beaten her' speech from Paul as we got changed and made the 3 hour drive back home. Paul didn't say a word all the way home, Gae didn't speak English and Wil was asleep...it was an awfully long, silent drive home. I knew I had f*cked up but I couldn't dwell on it, just had to get back to training and move onto the next one.

I had three more fights after this in the UK which I won two and drew one. One of the victories was winning the Northern Area Title which was pretty cool. Up until that fight I still hadn't told my parents, bare in mind I'm into my 20's by this point but with the title fight coming up Paul suggested I tell my mum and dad. He said they might like to be there, I was waiting for an onslaught from my mum when I told her but she was fairly mild. Reminded me fighting wasn't for girls, that she doesn't want to see me get hit in the head (understandable) and that she won't watch it, my dad however came to watch along with my brother as always. 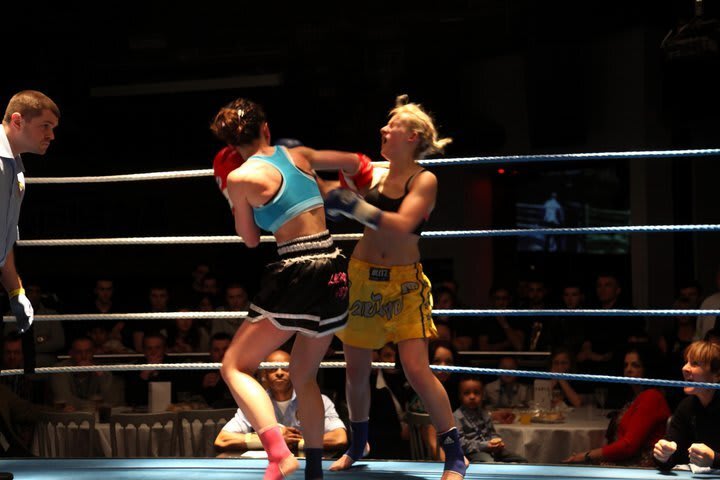 Pic: One fight from a show in Manchester. 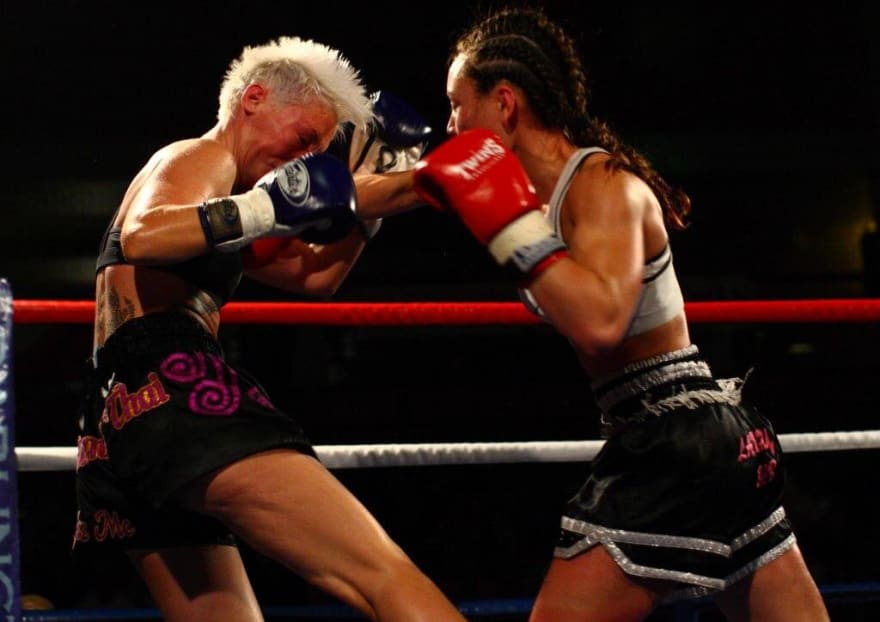 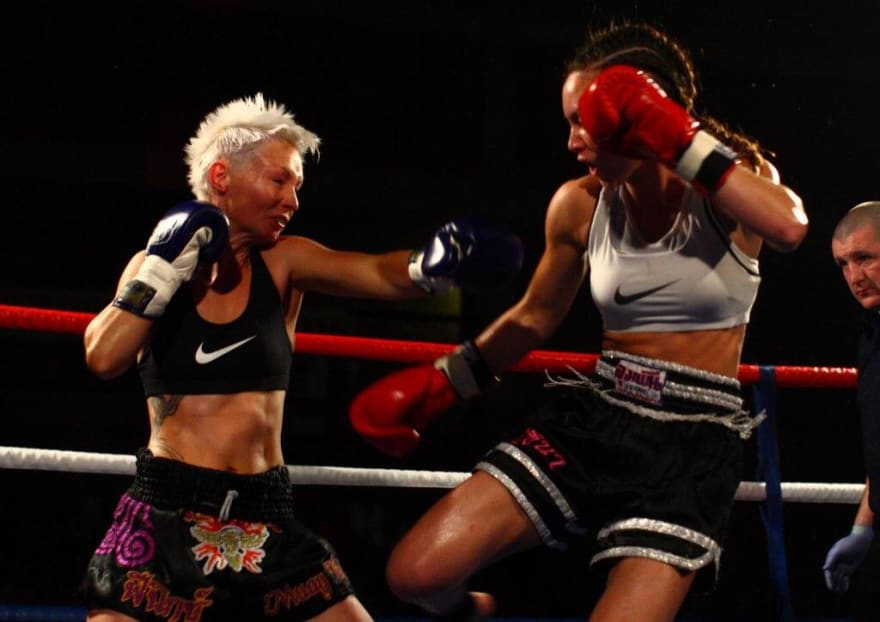 Another home show, no pics from the title fight but I’ll include the video footage.

For the title fight I remember feeling the usual nerves as I was about to walk out but Wil had told me to 'fake it til I make it'...to at least act confident and you know what, despite still shaking I really enjoyed walking out to that fight, my head and hands held high as I entered the ring. Gae was still here at this point, thankfully he didn't warm me up this time but I had some brutal pad sessions with him over the time he was at the gym, I sound like I'm complaining but he did really help bring me on, he was ace. Actually except for when I thought he'd snapped my hamstring in between rounds, he did that thing where he grabs your leg and tries to push your foot up to your head (mine don't go that high) I yelped then he squeezed the water bottle into my mouth just as I was breathing in and I nearly choked on the water...fun times! Anyway, 5 rounds later I won the fight and I went to find my dad after. He didn't say a lot but I think he was really proud...and so was my mum, I only know this because my mum had her friends round (usual do) and she made me put my belt on, stand with my huge trophy and get a photo taken which they have up in their house now. So I'm pleased Paul told me to tell them. 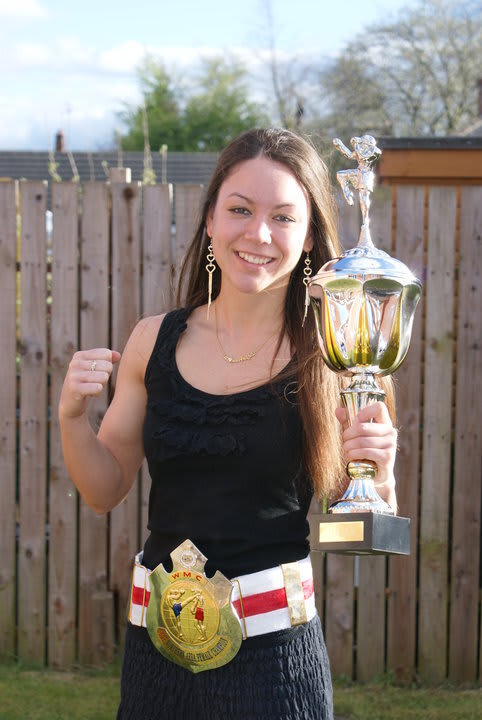 I was 22 years old by now, I was in my final year of uni and an opportunity came up to travel to Bangkok, Thailand and audition for Master Toddy's reality TV show 'TUFF GIRLS'. Ring Girls came before this with Gina Carano, then there was a season of 'TUFF GIRLS' and then auditions for a second season arrived.

This was the first time I had travelled so far alone, my Thai brother Dang picked me up from the airport and dropped me off at the camp, I was apprehensive about how the next few weeks would go but it turned out to be such an AMAZING experience!

Girls had travelled from all over the world to be there, approx 14 of us in total and then one girl turned up late. She was like a fog horn, I instantly heard an English accent, walked over and said something like 'who let a Cockney in here'...that girl was called Hayleigh and she became one of my best friends from that moment onwards. 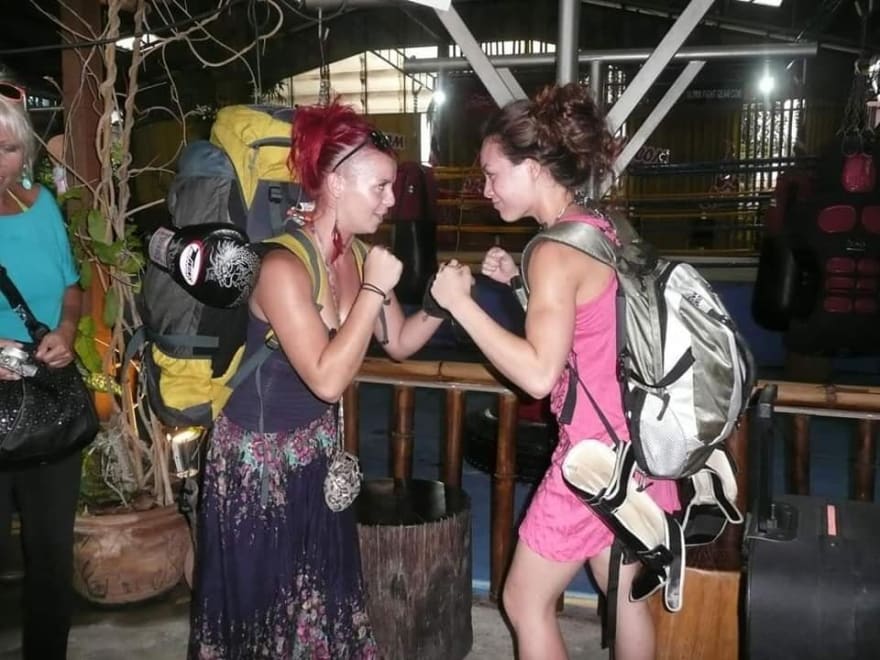 We had the best time, we trained for 3 hours each morning and evening for 3 weeks (with a little partying and a lot of M150's mixed in) then at the end of the 3 weeks we all got paired off to fight each other. I was paired up against an American girl called Carmel, I actually really liked Carmel, she was chill, down to earth, friendly girl and I was a little gutted I had to fight her but...that's what I was there for! 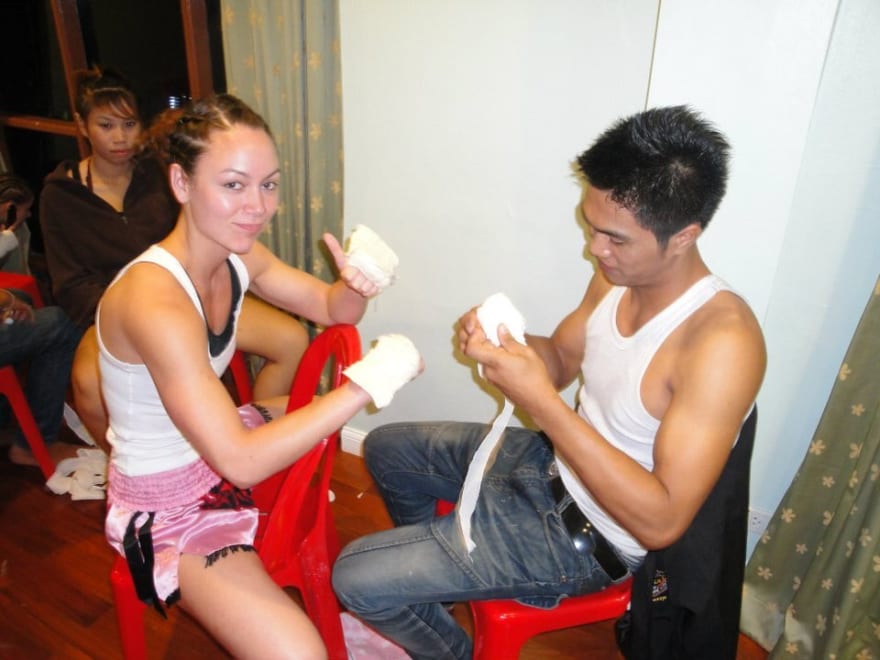 Hayleigh was supposed to fight a Thai chick but there was some story about her being in a car accident on the way to the venue so she didn't end up fighting. Instead of sulking she had my back every step of the way. Everyone back home had also tuned in as they live streamed it so I had so much support from there too! 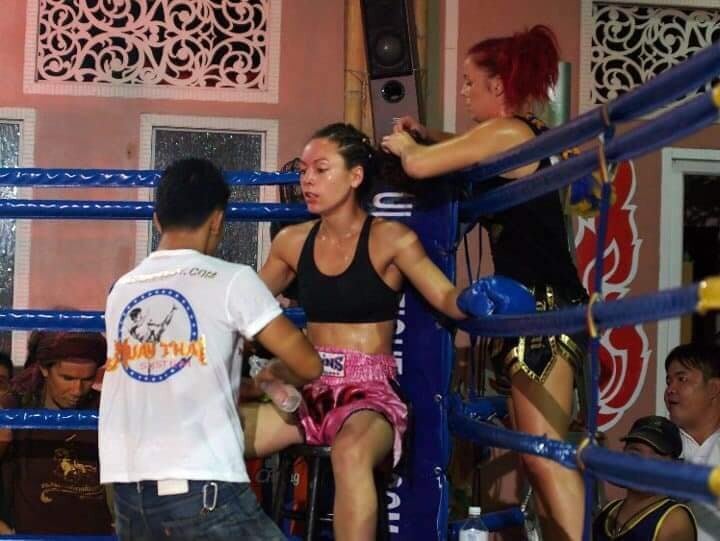 What an experience with the Thai crowd!

So the winners of the fights were supposed to go onto film the rest of the show but it didn't end up happening. That sucked, but I'm still so grateful for that experience.

By this point I was in my final year at Uni and I had chosen Strength & Conditioning as a career path...oh wait so I actually had the choice of going on to do a Masters in S&C or flying out to Bangkok for these auditions as they were both in late August of 2012. I figured the auditions were happening there and then and I could always do the Masters the following year...whether that was right or wrong I don’t regret that decision. However I didn't go back to do my MA, after a year out from studying I couldn't face going back to it (the written parts at least...bloody dissertations!).

This is the year I met Barry Gibson, S&C Coach in Sunderland and coach to many combat athletes at the time. I asked if I could do my work placement there which was only meant to be 40 hours but I absolutely loved it. Barry became my mentor, coach and friend and taught me a huge, huge amount. This was another awesome part in my life. 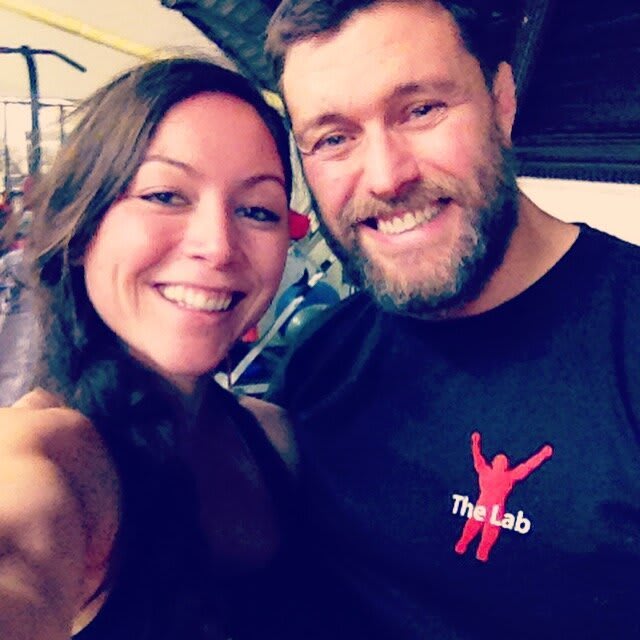 So, only 4 Muay Thai fights left to go...I'll cover all of these in the next blog, stay tuned and as always, thanks for reading.

The Lab MMA Gym
Two Loses, My First KO and a Change of Perspective
#muaythai #lanchanagreen #mma
A Scot, an Italian and a nervous nellie walk into a sports hall..
#inspiring #mystory #ufcfighters
Rebellious Teenage Years & And a Muay Thai Coach That Didn't Let Me Quit
#muaythai #inspiring #business