As I left it on my last blog, I went off to study a degree in Fashion Design & Marketing. I applied for 3 Universities; Nottingham Trent, Leeds Met and Northumbria Uni and I didn't get into any of them...that maybe should have been my sign then that Fashion wasn't for me but instead of stopping to think 'Why?' , I just applied somewhere else and managed to get in at Cleveland College of Art & Design.

I had just done a full year studying Fashion, which I enjoyed. I loved drawing and designing clothes but somehow I just didn't fit it, I went every day but it was almost like I was just going through the motions because it's what I had always wanted to do growing up as a kid (be an artist, designer or a choreographer lol). At this point I'm not sure I could have loved Thai Boxing anymore, if I had to stay back at a class which meant I would miss training I'd find a way to skive off early, I wouldn't get involved with any extra curricular activities or weekend events if it meant I would miss training or travelling somewhere to watch others fight etc...again, I still hadn't realised at this point I shouldn't be doing a Fashion degree.

I was working part time at Evans Halshaw Peugeot on the reception desk each weekend and I remember complaining to the lady I worked with (Steph) about how I was dreading going back to do my second year and all she said to me was 'Well why are you going back then?'.

That was it. The penny dropped. Why was I going back? I clearly had a love for something other than Art & Design and it was there all along…Thai Boxing!

It was the 6 weeks holidays at this point, I decided to drop out of the Fashion degree but I couldn't not study. I wanted some qualifications plus I enjoy learning so I sat down and figured out how can I make a job out of Thai Boxing. There wasn't and isn't really still much money in fighting unless you're the elite of the elite and even still you can only sustain that for so long so I decided once I was good enough I would teach Thai Boxing. But I didn't have a clue how to be a teacher. Being able to train/compete is one thing, being able to pass on those skills is another so a quick google search and an application to Teesside University I enrolled onto a degree in Sport & Exercise – Coaching Science.

Well bloody hell it was hard! I had never learned about Anatomy & Physiology, Biology, Psychology and all these other 'ologies...but man I loved it, I felt like it was helping me improve as a martial artist too as I was learning about how the human body works, the mind works, I learned about nutrition, S&C and so much more it was amazing.

I was buzzing, I felt like I was on the path that I belonged.

So, back to fighting. I had my first international fight against a really strong opponent in Barcelona. It was going to be my first 5 x 2 minute round fight with elbow pads on and I was fighting a little heavier at 54kg. I walked around at 53kg back then so I didn't have to worry about losing any weight on the flight over or anything! Again a whole load of us travelled from the gym and it was a great experience. They put on a fiesta and made us all feel very welcome. 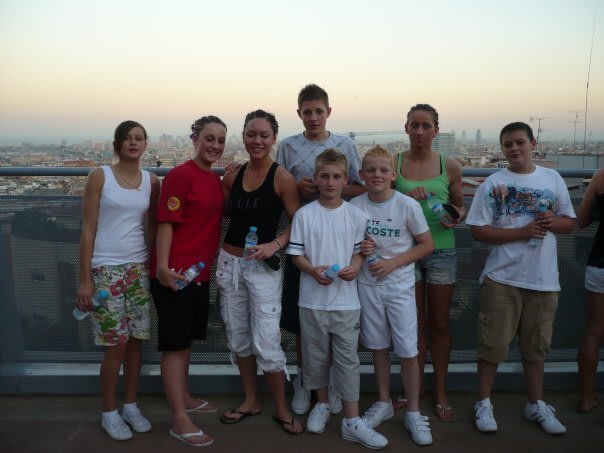 Come fight night, I was fairly nervous, it was inside a small sports hall and the crowd was a little hostile, it was the first time (not that I'd fought many times) but I was getting booed by the crowd as I walked out. My opponent then took ages as she salsa'ed her way to the ring and made a big show of it. We both did the Ram Muay (this was my first time doing it and I was more nervous for that than the fight ha). The bell went...then it was over within 3 rounds. I was gutted, my opponent was good and also completely overpowered me I felt like a rag doll getting tossed about no matter how hard I fought back, Paul threw the towel in and called it a night for me. I left physically unhurt and live to fight another day. 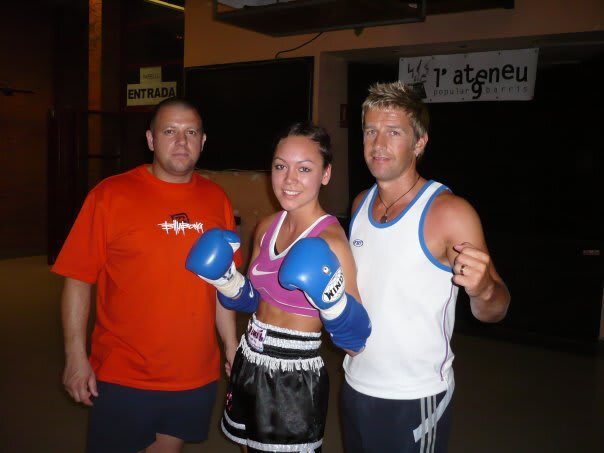 So that was short and sweet, my next fight was in Bolton, back at 52kg. In the week leading up to that fight I was so run down, at Uni I had done a Vo2 Max test, a bleep test and was just full of snot. Wil did tell me not to do either of those tests and rest up for the fight but I didn't listen, I figured I'd power through and do everything.

I lost that fight too. Have you ever felt so drained that just having to stand up and get yourself a glass of water is an effort? That's how I felt going into that fight, after a great first round I felt f*cked. It's an awful feeling when someone across the ring is trying to physically hurt you and you feel like you're wading through glue. It was still a close fight mind, I dug as deep as I could but she just out pointed me with work rate. This was a frustrating loss because I knew I had the skills to beat my opponent but… 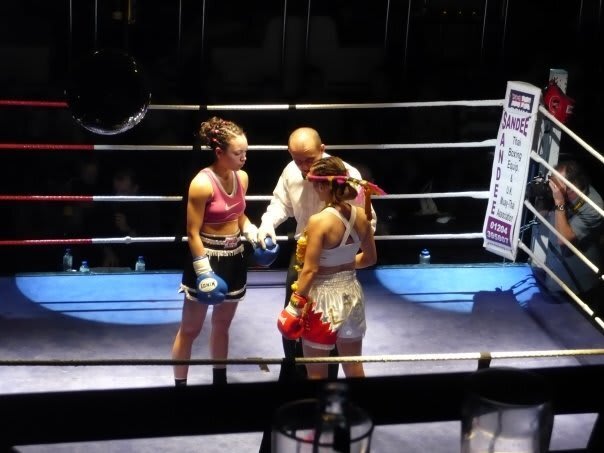 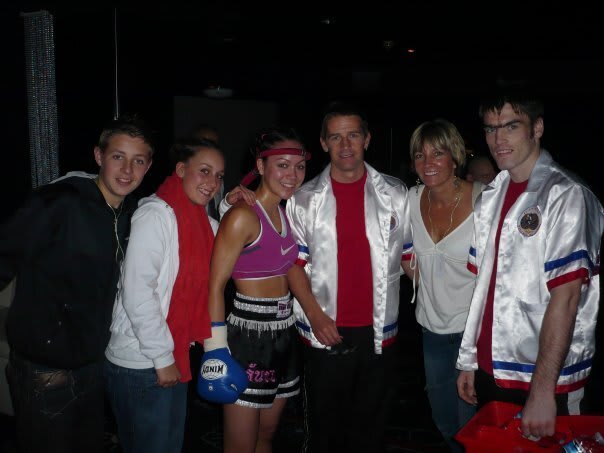 Next up I was preparing for another home show and by this point I had met Chloe Roddam who had become an amazing training partner and still to this day is one of my close friends. We were both fighting on this show along with a host of other local fighters. My opponent was from Scotland this time, I was confident enough to walk out first by now but still terribly nervous. I had Paul, Richie Chaney and Marc Howey in my corner and their banter instantly made me feel at ease.

I walked out to some rave tune, everyone was cheering and I was full of smiles.

This fight didn't last very long, I had a significant reach advantage which was beneficial. Paul must have seen the winning shot because all I could hear was 'Right hand, right hand, right hand'...and boom, threw the right hand and down she went. I didn't really know what to do as that had never happened to me before but after I had gone back stage and it had sunk in, I was chuffed that I had got back to winning ways and had done it in good fashion to.

So that chapter concludes some ups, downs and career changes! Sometimes it just takes someone else's perspective to set you back on the right path.

My mum is really old school...if you hadn't guessed already, I was always told to get a good job, get a good husband and have kids. True story she once told me to leave Wil and find someone rich hahaha!! She's actually hilarious now that we get on but man I took some insults growing up, she proper had my life at times.

I feel like I rambled on more about my academic life in this blog but it was a pivotal moment for me. Remember that change is inevitable and we should welcome it. It might be scary, it might be risky but try to evolve, adapt and be as open minded as possible, I find it's better to try and fail than to never try at all. On this occasion it worked out for the better as I love my job today.

Thanks as always for reading, stay tuned for my NE Champ victory and a trip to Muay Thai capital of the world, Thailand!

Inside heel hook from start to finish

Why Karate Combat will flourish

Will Tai Tuivasa spoil another hometown hero or will Gane prove he is championship caliber?