For those that don't know I have a Thai mother and an English Father. My dad is laid back, patient and super quiet, in fact I'm not sure I ever heard him raise his voice at me growing up. My mum on the other hand is this huge ball of energy that radiates whatever emotion she's feeling at the time, if she's happy we know about it, if she's sad we know about it and if she's angry...well, hell we definitely know about it, I once watched her chase a guy off our driveway with a wok!

But my mum can talk to anyone, we'd be walking back from the supermarket and she'd offer a stranger some grapes, she'll make friends with the person next to her on the bus and had an open door policy at home for our neighbours to pop in whenever they liked. I think this is a Thai thing but most definitely her village culture, my mum grew up in the North of Thailand, in a small village called Ngao. Most of my childhood was spent visiting there every 18 months, the small wooden house my mum grew up became empty once her parents passed but next door to it was a bigger wooden house with some of our family there which is where we would stay. No hot water, a classic Thai squat toilet and the clothes washing still done by hand. I'm grateful I got to experience that way of life. 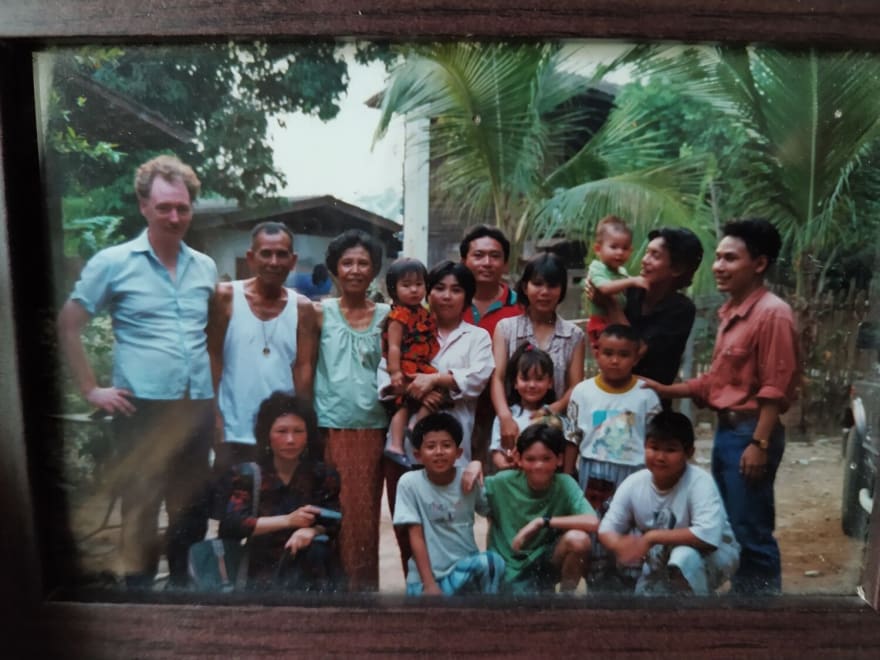 Ngao, Thailand around 1996…Dad is obviously the 6” ginger guy on the left and my mum is crouching down at the front.

I never appreciated this until recently but as a child my mum would give me to other people to look after me a lot, especially in the village...she didn't need to and a lot of the time I didn't want to go, I don't speak Thai and they spoke very little English but anyway off I'd go on the back of someone's moped later to return that day or the next. As much as sometimes I hated that, I think it's definitely played a part in who I am today as I've totally turned into my mum where I can start a conversation in person with almost anyone, anywhere. I once tried to do it stuck in traffic on the A1 with the car next to me...however the guy just put his windows up and wouldn't make eye contact with me. So you can try, but it doesn't always work ha!

I feel like I'm digressing but a bit of history is starting to reveal how I went from the shy kid that couldn't hit some Thai pads in front of a few parents at the gym to the woman that fought on the other side of the world in front of 15k people on two days notice. 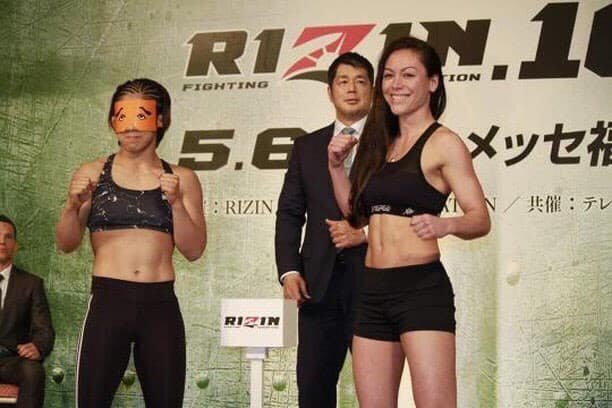 So, back to childhood...Growing up I definitely took after my dad, I was quiet, shy and I was happy just playing by myself but I did have friends too and loved playing with them, making up dance routines, magic shows, roller blading etc you name it, we'd be out playing for as long as we we're allowed.

I had one particular best friend growing up called Nikitta and we are still friends today. She lived in the street next to mine and we ended up in the same class when we both started school. Nikitta was the Ying to my Yang, confident, sassy, sometimes a bad influence but we had the best times. She always had my back and I know if I called her up right now and said the shit has hit the fan...she'd be there all guns blazing! Nikitta's mum was called Simone and Simone became my second mum. My dad worked away a lot during the week so Simone would look after me if my mum had to work too. Simone was the Ying to my mums Yang...she's so calm and super thoughtful, I am lucky I had both of their influences growing up. 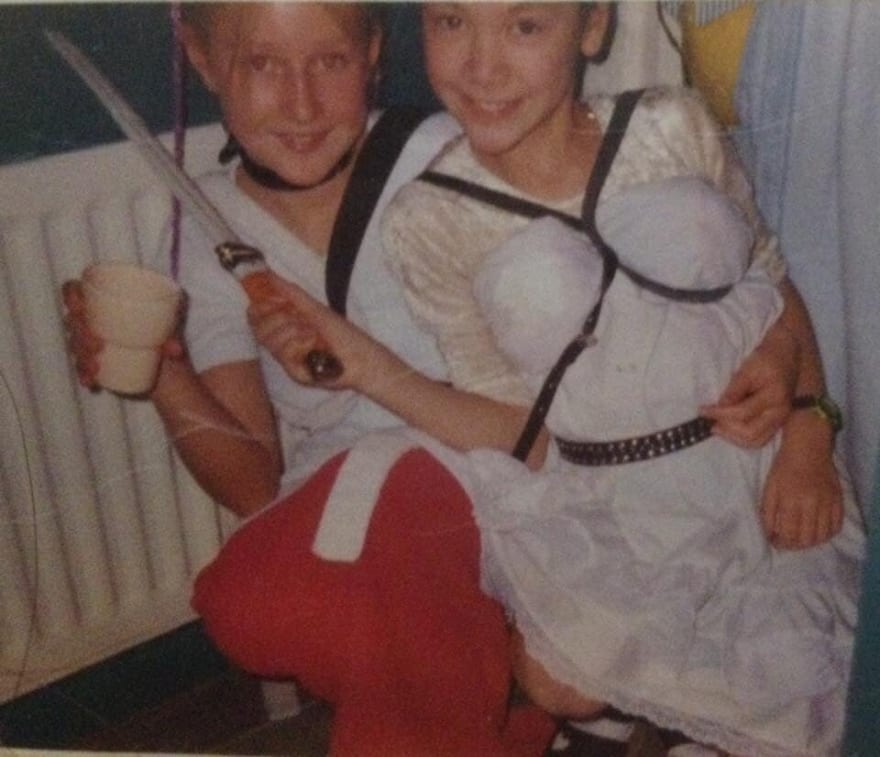 We liked Xena Warrior Princess back then!

Anyway, eventually Nikitta asked if I wanted to go Thai Boxing when I was about 6 or 7 years old, Simone's husband Paul had a Thai boxing gym. I mentioned this to my mum and she reluctantly said I could go (my mum still is super old school and still says the phrase 'fighting is not for girls'). So off I went and much to my mum's relief, I hated it. I literally cried in the class, I got so worked up and embarrassed that I had to run to the four corners of the mat and hit pads at each one that I refused to do it. One of the older girls was so kind, she took me to one side where no one could see and did a little bit of pad work with me then I never went back.

That was it, I didn't start my martial arts career at 6 years old and that's all good. It wasn't for me at the time but I ended up returning when I was 14 years old which I'll cover in the next installment.

Now, as a coach, I teach kids martial arts at The Lab and have taught at a few local schools here in Darlington and every so often there's a kid that doesn't want to join in, they cry, they freeze or they want to go home. I do what I can but we never force any kid to take part, they remind me of me and my first session and I always wonder how they'll turn out in years to come. Every moment growing up and how we respond to those moments are crucial for our development...seriously having kids scares the sh*t out of me, being responsible for a mini human and how they will turn out. 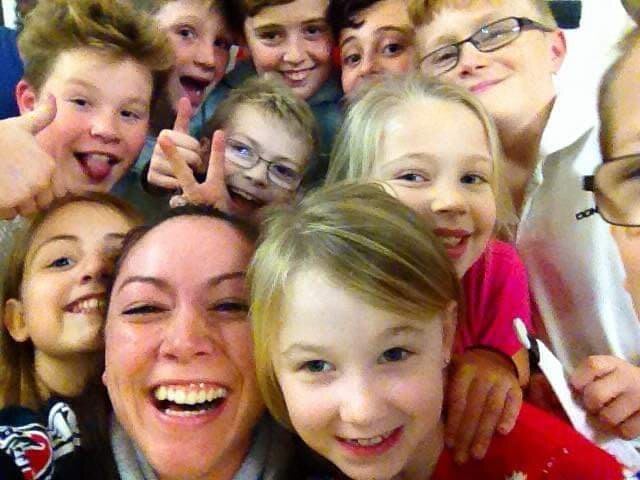 Old pic of when I first started coaching the kids classes at The Lab…such fun little humans!

As a kid I was told that I was shy which I think reinforced that belief. I can't remember when this stopped or if my parents told me if I believed in myself I could do anything (sorry mum and dad maybe you did but I can't remember at this moment in time), saying that though, my mum would tell someone I'm shy then still send me off with them ha!! But I do remember going back to Thai Boxing years later and that's when my confidence really grew. Paul (coach) believed 100 percent in my ability to do well, even if at times I didn't believe it myself but the journey martial arts took me on, the training, travelling, meeting new people, the gruelling sessions, the running we had to do (that I hated with a passion), the highs and lows of competition all certainly played a humongous role in who I am today.

So, there you have it. How my first Thai Boxing class wasn't an overly positive one at the time but it did start an amazing journey waiting to be had...years later! So that in itself, is most definitely a positive.

Stay tuned for the next chapter, plus more embarrassing old photos!

This MMA Life is the best place to share your MMA or martial arts story or kick start your MMA writing or journalism career! Get started today

Coping with the fear of failure in MMA

Using the ‘F*CK IT’ method to combat hesitation in MMA