New years resolutions have never been my strong points to be honest. From what I can gather they more or less involve giving up something which brings you pleasure or forcing yourself to do something that doesn't bring you pleasure. However, I will always make them without fail. In order to still be able to drink whenever I wanted and dodge going to the gym at leisure, I decided that the new year resolution would be to go to one jiu-jitsu seminar a month, a kind of extracurricular way of spicing up my Gracie learnings.

My first port of call was checking out where they were and who was running them, Facebook holds wisdom like no other when it comes to this kind of stuff. After sussing out a few seminars and doing some research I found a chap by the name of Ben Poppleton who is a well respected black belt and was the first Brit to be awarded a black belt by a Gracie. His seminar was on the butterfly guard system and was to be hosted at the tropical paradise that is Cannock, a small town just off the M6 toll at Cannock BJJ. 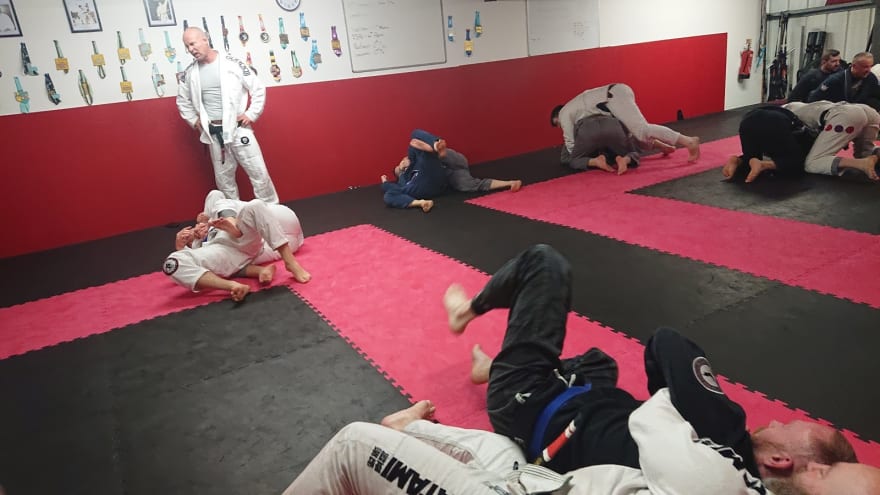 Having never been to a seminar before I wasn't so sure what to expect and what the protocol was. I tried to blend in, found a training partner and did what I was told. Despite being a little intimidated due to the array for darker coloured belts that people were sporting, and gradually becoming aware that a good few of the folk were higher-level guys, it soon became apparent that like most of jiu-jitsu it was about learning as much as you can and having a fun time whilst doing so. 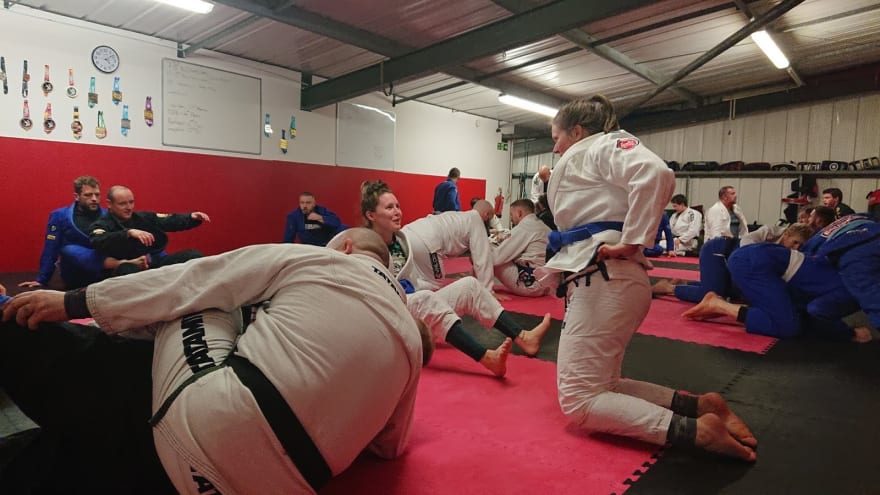 One thing is being very good at something, another is knowing how to teach that thing to others. Bearing in mind that unlike a school setting where you are organised into classes depending on intelligence level (or lack thereof as was the case for me), at these seminars anyone can go regardless if they have trained one month or 20 years. To be able to break down the concepts into a way that is graspable for everybody and make sure that everyone takes away the maximum is not an easy task at all. 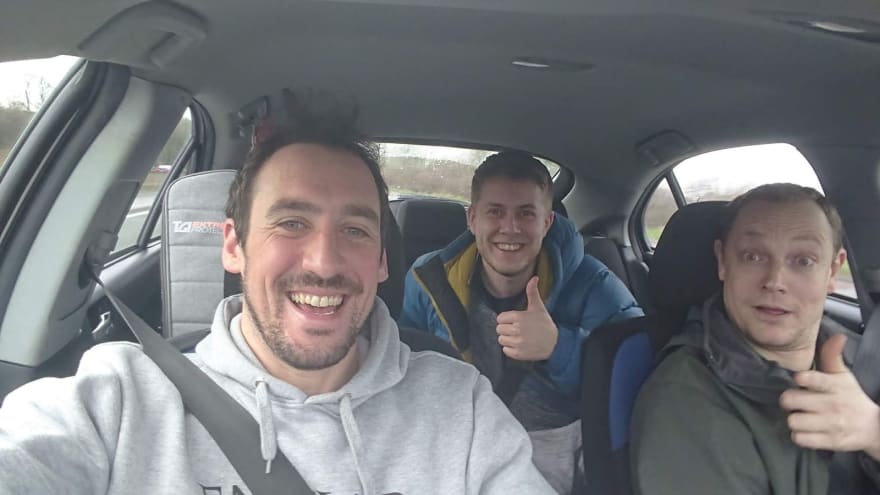 Luckily Ben is one of the few with a way of explaining things and layering things up from such a basic concept. By adding detail upon detail, he will have you not only doing advanced moves but understanding why they work on a mechanical level. A typical progression would be starting by simply looking at how a hand reaches to grip the opponent, then add how the shoulder effects this, body balance, position in relation to opponent, what happens if they slip out, and every step is reinforced by a detailed look at why we are doing what we are doing. 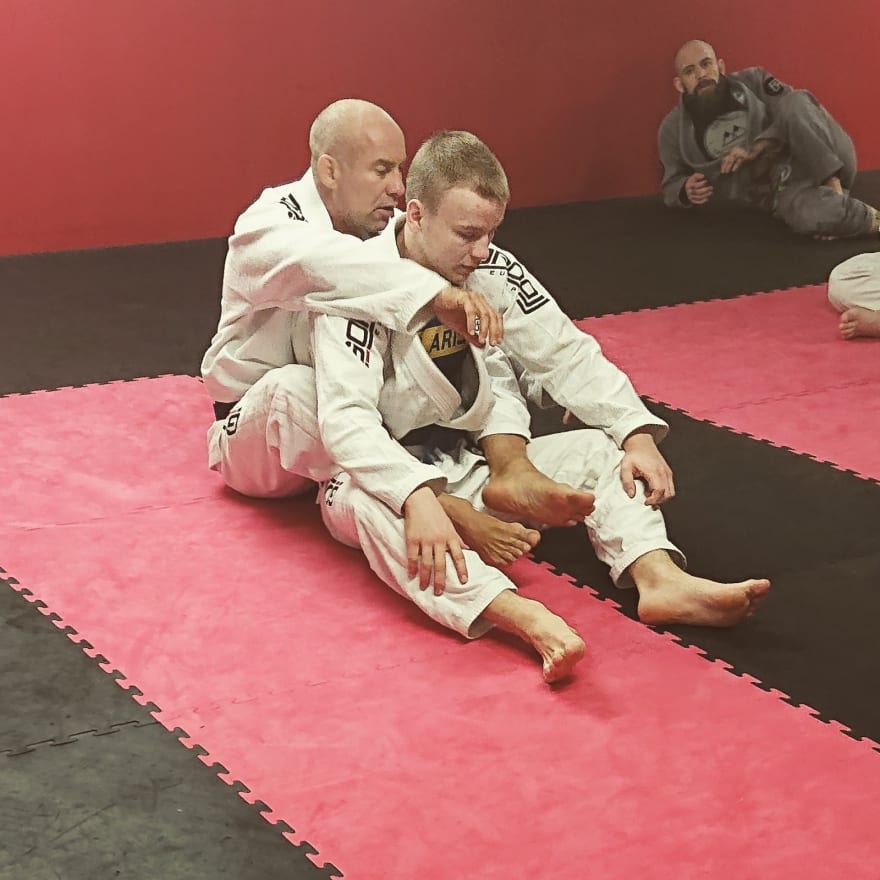 I took lots away from the butterfly guard seminar and believe that it has had a big influence on forming my "game" as such. It also made me want to learn more from this Poppleton character. To my delight, a few weeks later I saw that he was doing a double weekend session at Lakes BJJ in Kendal. I got myself booked on straight away and after what seemed like a long wait finally got in my car with a couple of lads from my club and headed up the road to Kendal. 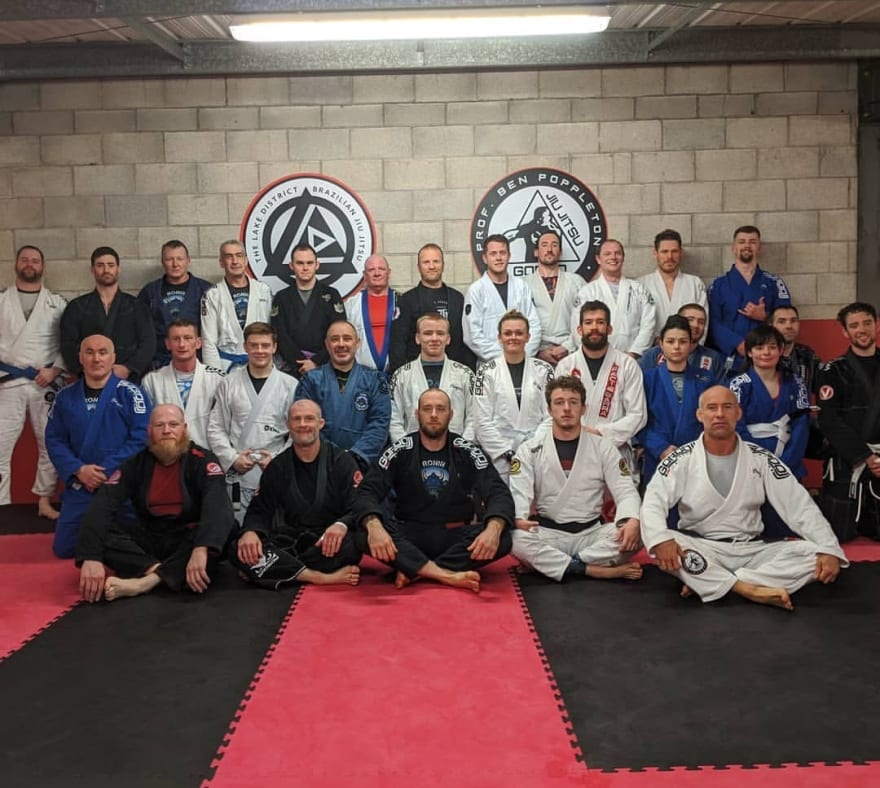 The main man at the Kendal club, Sam, did an outstanding job of sorting out everything that one could want for a weekend camp, and the training centre is a great facility with everything you could want from showers and lockers to hot food and drink, he even let people sleep on the mats if they didn't have a place to stay. Being a 2-day course with the title of it "back controls, strangles and finishes", there was lots to take in. Ben did a fantastic job of taking us all through baby steps to get us applying the most disgustingly efficient strangles that one could ever imagine. 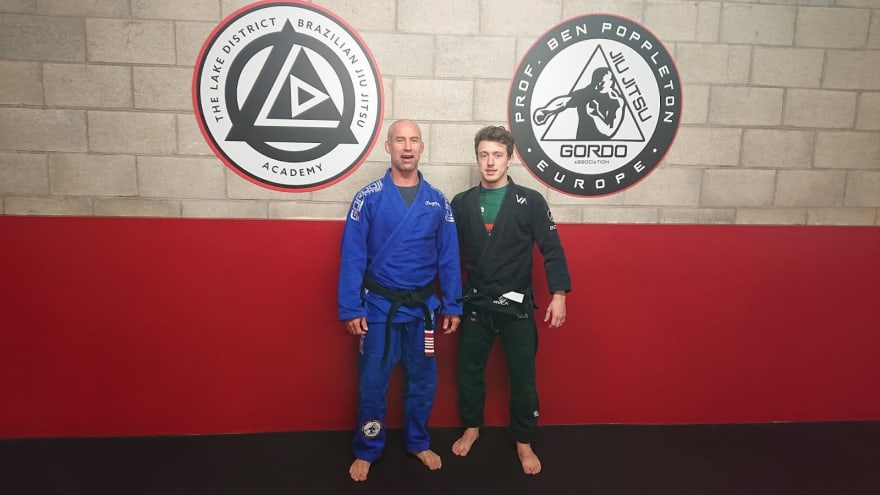 Like the previous camp, Ben started with the most basic of the basic and breaking down why everything works the way it does. He does a thing which is very rare to see which helps understand concepts, that is to completely isolate a movement or concept from the reality of the situation of a "fight" until everybody has grasped it, understands why it works and then will introduce it to be used in a "real-life situation". With so many things to think about at once in jiu-jitsu this is especially useful as it seems to put the essential information into a deeper place in the brain. 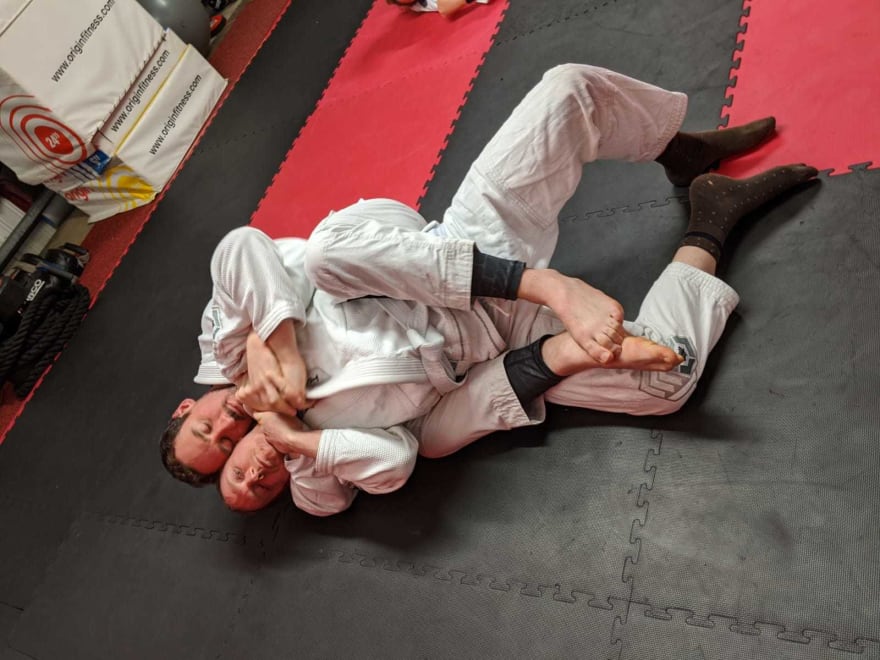 Ben explained about grip positions and the importance they play in great detail, something that I have never heard anyone speaking of in my short time doing this. I now understand the importance it plays and having rolled with some judokas ( Judo practitioners) who have exceptional grip control, compared to people that have never had it drilled into them, I can see a clear difference and understand the importance that it plays. The way I have understood it is that the grip is the first thing that you connect to the opponent with. If that first connection is not solid and you risk losing it then no matter what the following steps are, you will not have the certainty or foundation to build upon to complete the sequence and get the job done. Like many other things in life it is easy to get excited about rushing to the end goal, in jiu-jitsu that is the submission or "move".

Ben made it as clear as day that unless you invest in setting up and investing and understanding every step, there is no point in getting excited about the finish. He said something that will stick with me forever, "always aim for an A+, if you get a B then shit happens, but you might get that A+, if you go for a B then you could end up with a D which is worth nothing, always aim high". 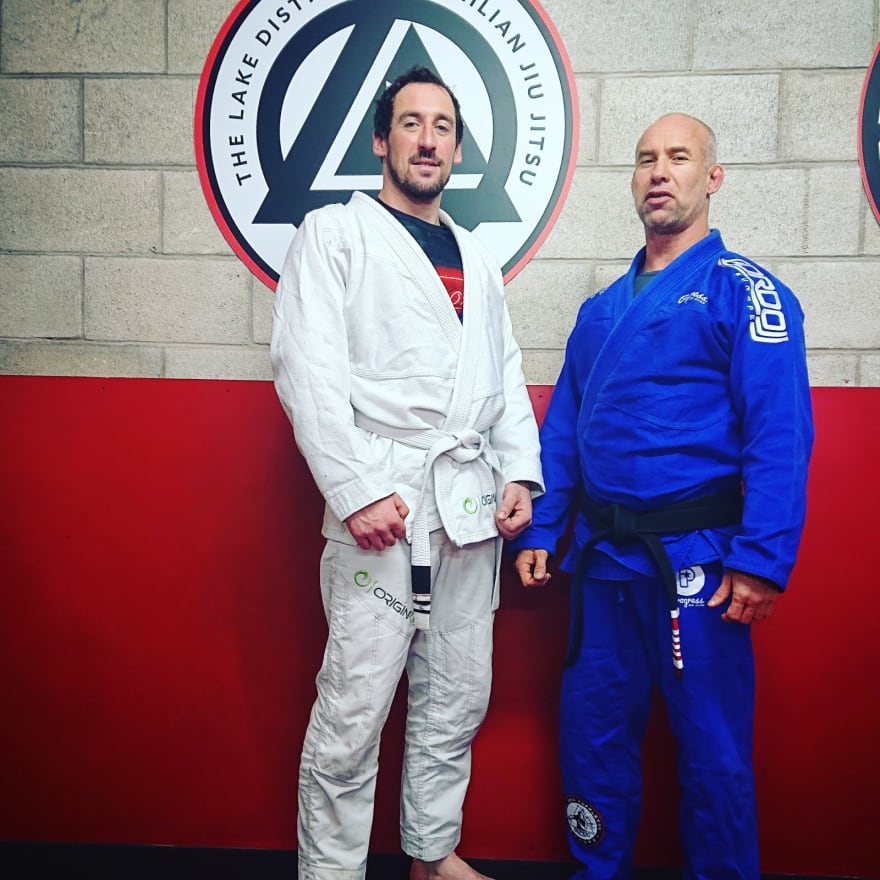 I think that it was Einstein who said: "if you can't explain it to a 6-year-old then you don't understand it yourself". Despite being 32 years old, my jiu-jitsu brain is almost definitely less than that of a 6-year-old. I have seen many of the "experts" on youtube and learn with guys that I consider to be truly good teachers (hence why I continue with them), but nobody I have seen or met breaks things down in such a cerebral way to make brutally effective moves understandable and executable by all as Ben does. Mixed up with a constant dash of Yorkshire humour and interesting facts and history of BJJ lessons, what ended up as a back to back weekend camp was over in a heartbeat.

Luckily I have the entire thing filmed and I know that the things learned are going to become a part of my game no matter what level I get to. The atmosphere was great at the dojo and Sam along with the more experienced guys were there to lend a hand to white belts like me that frankly need all the help and guidance that we can get. I can't recommend Ben highly enough as a teacher and plan on following him around like a bad smell to eke out all of the knowledge that he has to give.

I mentioned earlier about youtube instructors and videos. It has become a little gripe of mine as talking about youtube videos can seem to be as much a part of BJJ as just getting the mats and rolling for some(possibly it is a white belt thing). When I look at how I want to learn something, be it jiu-jitsu, a new language, music or anything else, I always look at where I see the most results from and follow that path, not where the biggest hype is coming from.

Hype is a machine and these days with marketing and the internet it can have many imposters and people bowing down to folk because it is what they are told to do. One of the things that I really have noticed from the 3 weekends that I have spent with Ben is how impactful the results of his teachings are, both for me, and the others on the course, regardless of experience or level. It is this that drives me to continue with his seminars as and when they become available. People that profess to understand a lock or choke from a video alone I have rarely if ever seen execute the move, in reality, people that have learned from Ben on his seminars execute the moves with precision and consistency on a regular basis.

Enough ranting. To close out I just want to say again a huge thanks to the main man Ben Poppleton and I can't recommend him highly enough. Also to Sam, Will and the rest of the guys at Lakes BJJ thanks so much, it is a fantastic training centre with a great welcoming atmosphere well worth checking out if you are ever in Cumbria. Catch you next time, and remember to wash your hands.

This article was first published on The Neon Belly

If you have a good link that shows Ben Poppleton's up and coming seminars or any other great resources then leave a comment below.

Miss Jessy Jess shows us how to wrap hands

John Danaher "Don't listen to what people say, watch what the best people do"

Chris Pedley
Not long in the game of Bjj but documenting my findings and developments as I go.
Once upon a time in Brazil. Gracie Combative's
#tutorials #bjj #graciecombatives #inspiring
Starting out in the world of Jui-Jitsu, BJJ or GJJ
#bjj #tutorials #inspiring