In September 2019 and I decided that after years of having an interest in Martial arts it is finally time to take the plunge and to set the ball rolling.

Like many of my age, I am a bit of a podcast head and no matter how hard you try to avoid it the Joe Rogan experience is the king of the castle. It is hard to go a few podcasts without hearing about Jiu-Jitsu or Mixed Martial Arts at a minimum. Although the JRE (Joe Rogan Experience for those not down with epic modern-day podcast abbreviations), was the first to open my eyes to the weird and wacky world of Jitz, it was when I stumbled across the Jocko Wilink podcast that my curiosity developed into something that I really felt compelled to pursue.

Jocko Wilink is a retired US Navy SEAL, business coach, a black belt in BJJ and all-around mentalist, also the main man (unsurprisingly) on his very popular "Jocko Podcast". His a way of analogizing enables him to relate terrifying warfare operations in Iraq to a way that can be used to solve problems at a paper mill or tech office, and has lead to him writing many top-selling books for business and personal coaching and development.

Listening to the way that he described how Jiu-Jitsu relates to life, relationships, warfare strategies, and personal development, both physically and mentally was what ultimately turned out to be the straw to break the camels back and submit me into seriously searching for a club.

There are so many different schools in the world of Jiu-Jitsu, both physical schools and all of the schools of style or interpretation of it. One could draw a parallel to dance or playing the guitar perhaps, there is traditional Ballett and break dancing like there is classical guitar and heavy metal. In the world of Jiu-Jitsu although perhaps the differences aren't quite so noticeable as those between a breakdancer and ballet dancer they still provide a fair amount of confusion for getting started and can frankly be enough to put you off if you start to listen to the BJJ geeks.

With that in mind, I thought that I would take the logical and systematic approach of writing to the closest club to my house that could get me started and whatever "school" it was I would just go with it as it would be better than my then-current school of jiu-Jitsu which involved watching the UFC and not really understanding what was happening.

I was somewhat nervous when writing to the closest club Hebden Bridge Gracie Jiu-Jitsu, and wanted to make it perfectly clear that I had no experience. Part of me was half expecting to walk into a club of absolute killers and be thrown into a brawl and have each limb torn off by skinhead tattooed psychos. Within a few minutes of writing to the club over their Facebook page, I received a reply from a very enthusiastic person telling me to come down on Monday evening and have a taster. His internet tone (if there is such a thing) seemed friendly, positive and keen to get me started. 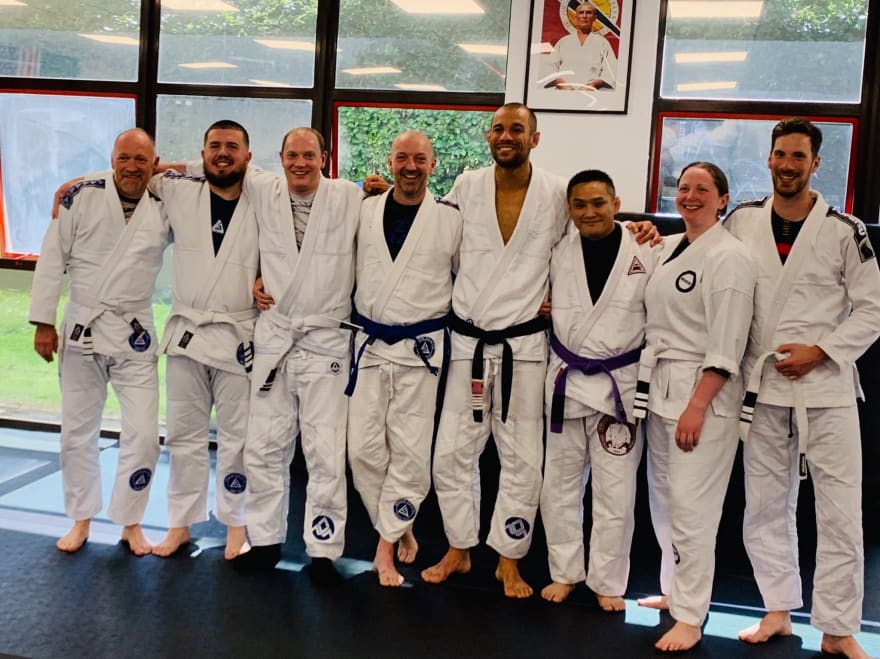 There was no turning back now I thought as a few follow up messages came before the first session telling me that he was looking forward to meeting me and checking that I was still coming, a good salesman if nothing else I thought, that was worthy of me checking it out in my books, just to see if this guy was for real.

He told me that he would provide me with a gi (the kimono as it is called in other forms of martial arts) and that I had 10 free classes to decide if it was for me or not and all I needed to do was keep on turning up to get better, he also warned me that it was somewhat addictive and easy to get hooked on. This last part is one of the truest things I ever heard. Now all that was left to do was possibly the hardest part of the entire thing, showing up and walking into something that you have no idea about with nobody there to hold your hand and no self-respecting way out once you walked through the door.

Fast forward a couple of days and there I am looking up at the block of buildings where the club lays on the top floor wondering if this was a stupid idea and not quite knowing what to expect. "Suck it up buttercup," I thought to myself and plodded up the stairs. Despite all that I have learned now in my 6 months in training, I still maintain that this was the hardest part of it all, the lonely walk into the unknown. When I opened the door and looked around to try and suss out the vibe and what kind of people were there it was not at all what I expected.

Rather than a bunch of bloodthirsty killers tearing each other apart and bodies flying left right and centre, there was a group of small kids running around playing whilst a group of smiling chatting adults stood conversing on the benches to the side. Needless to say, I probably looked a little awkward as from what I have seen every person that enters does on their first time. Each person that came past me on their way in looked, well, like a geek, to be honest, a very polite geek, acknowledging me and saying hello on their way to get changed. It felt more like a group straight out of a Microsoft Excel course than the UFC as I imagined it which was as comforting as it was confusing, and as I have subsequently learned, completely normal in the world of Jiu-Jitsu.

"One second and I'll be right with you big man!" beamed over the instructor from playing about with the kids class. Darren(the instructor) is a lanky ever-smiling guy who is an electrician although he seems like he could be a kids presenter on the TV with his eternally daft sense of humour and a way of making you feel at home straight away. He also has the best memory with names out of anybody that I have ever met. He said that he was glad that I made it down and after a bit of chatting and introductions he passed me my Gi and sent me off to get changed and see him on the mats.

When I came back he explained to me how the size and physical strength was more or less irrelevant in Jiu-Jitsu and did some demonstrations of techniques to hold an attacker down and most importantly get them off and get yourself away without a scuffle as soon as possible. The way that the weight is distributed, body parts interlock with each other and an understanding of the mechanics of the human body is ultimately what I took away from our intro of the technique called "Trap and roll", called so because if you are being pinned down by somebody on top of you, first you trap their foot and then you roll them off in an effortless move (or sweep as it is known in the BJJ world).

With a size and strength advantage on more or less everyone in there, it impressed and intrigued me how Darren and all of the other guys in there who were much smaller than me were able to do as they wanted merely through utilising the art of Jiu-Jitsu. Maybe some people would find it a blow to the ego (in a way it was), but it was essentially a modern-day example of David and Goliath showing that the pen is mightier than the sword. Throughout the first session, there was no sense of victory from anyone in the club, just a sense of fun, learning and sharing knowledge and techniques with each other constantly with a bunch of smiles and laughs going around.

One thing that I never expected was the fun element to it all, people spend a lot of money on various vices and physical goods and still don't have smiles on their faces like a bunch of random misfits from all different walks of society thrown together into a room mounted on each other like in a Jiu-Jitsu club. It was that which at the end of the class made me sign my life away and put my money where my mouth was and let my Jiu-Jitsu journey begin.

Chris Pedley
Not long in the game of Bjj but documenting my findings and developments as I go.
My Ben Poppleton BJJ seminar experience
#bjj #tutorials
Once upon a time in Brazil. Gracie Combative's
#tutorials #bjj #graciecombatives #inspiring

Once unpublished, this post will become invisible to the public and only accessible to Chris Pedley.

Thanks for keeping This MMA Life safe. Here is what you can do to flag theneonbelly1:

Unflagging theneonbelly1 will restore default visibility to their posts.